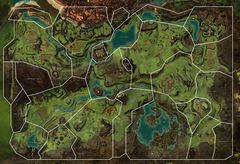 Queensdale is the heartland of the reforged human nation of Kryta. These rolling hills and well-watered fields are threatened by marauding centaurs and thieving bandits. The Seraph serve as its protectors.

Queensdale is the explorable zone south of Divinity's Reach. It is about half of the modern kingdom of Kryta, and holds the nation's primary farms in Shaemoor Fields and Beetletun Farms as well as the nation's largest forge at the Township of Claypool. To the south lies Kessex Hills, and Gendarran Fields to the east. All three locations are plagued by the centaur alliance, though Queensdale only suffers from Tamini in the eastern portion.