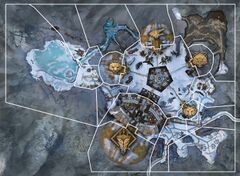 Hoelbrak has become the social center of the norn race. When the Elder Dragon Jormag drove norn ancestors out of the Far Shiverpeaks, the Spirits of the Wild — Bear, Raven, Wolf, and Snow Leopard — guided them to this area, and now great halls dedicated to those spirits dominate the settlement.

Hoelbrak, referred to as the Great Lodge of Hoelbrak, is the largest of the norn settlements that were built after the servants of Jormag drove the norn from their homeland in the Far Shiverpeaks. Hoelbrak was originally the hunting lodge built by Asgeir when he led his people south, placing the fang he took from Jormag in its very center. These days, young norn test their strength against the tooth, and it is said that the one to break it will signal the time for the norn to reclaim their lands. A vast sprawling encampment has grown around the hunting lodge, and Hoelbrak now serves as a central meeting place for the norn.

This outpost is dominated by five gigantic structures: the Great Lodge, holding the fang of Jormag, and four lodges dedicated to the Spirits of the Wild: Wolf, Bear, Raven, and Snow Leopard. Here the norn seek wisdom and commune with the spirits.

It is located in the Shiverpeak Mountains, rising above the Wayfarer Foothills.

The settlement is currently under the care of Knut Whitebear and the settlement that has been erected around the lodge now forms the hub of activity for the norn and those wishing to meet them. The settlement is the safest place around, and so it is from here that hunts are organised, friends meet, and ale moots are held.