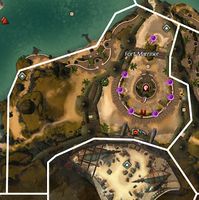 Fort Marriner is a fortified compound in Lion's Arch. It was named after Cobiah Marriner, the founder of new Lion's Arch, and serves as the headquarters for the Lionguard, their prison, and as the Lion's Arch base for the Vigil. It also holds the asura gates to the Mists. The fort was blighted and scarred after the Battle for Lion's Arch, but has since been restored to its former glory.

Heart of the Mists Asura Gate

Edge of the Mists Asura Gate

Fractals of the Mists Asura Gate

Lionguard Aircrew (During Festival of the Four Winds only)

For previous dialogue, see here. This is the current dialogue.

Lionguard (1): Think we're ready for another attack?
Lionguard (2): From land, air or sea. We won't be caught off guard again.

Lionguard Dahn: Captain Kiel? Yeah, I'd like to be her cabin boy.

Lionguard Dahn: I thought about joining the Black Lion Guard. They've got a great pension plan.

Lionguard Dahn: Nope, I don't miss the old Lion's Arch–not at all.

Lionguard Dahn: How many times has this city been destroyed and rebuilt now? I've lost count.
Lionguard Recruit: Tells you something about the people here, doesn't it.

Lionguard Recruit: My legs ache. That training session was brutal.

Lionguard Recruit: Captain Magnus ordered me to work on stances with those snot-nosed recruits.

Lionguard Recruit: The trading company is recruiting? I'd consider it, but I'm worried about job security with them.

Lionguard Recruit: Hey, do your feet hang off the end of your bunk too?

Lionguard Recruit: I've gotten used to getting up at dawn. I hope they don't put us on the night shift again.

Lionguard Recruit: Next time she and I spar, I'm gonna knock her into the ground.

Lionguard Recruit: We're planning a moot for the recruits who graduate. You can be my guest.

Lionguard Recruit: I can't wait to spar with that crazy charr!

Mist Warrior: Now recruiting for the battle for the Mists! Is your life a dead end? Looking for meaning? I have the answer to your existential dilemma right here.

Citizen (1): Think it's okay to fish from here?
Citizen (2): I don't know. There sure are a lot of warning signs around...
Citizen (1): But I think I saw fish jumping, right out there.
Citizen (2): I wouldn't mind a nice fish dinner. How about I watch out for Lionguard?

Child: What's it like at the bottom of the harbor?
Tad: The corals around our village are very pretty and the seaweed is very tasty.
Child: I wish I could stay underwater as long as you can.
Tad: Then you could eat tasty seaweed, toOo.
Child: Yuck! (laugh)

Wild-Eye Miller: Whatever happened to Mai Trin? Why didn't Delaqua Investigations take her down after Scarlet? I'll tell you why!
Wild-Eye Miller: Ever noticed the resemblance between the Delaqua sisters? Marjory. Belinda? Mai Trin!
Wild-Eye Miller: Trin is Marjory's long-lost sister. The secret family shame!
Wild-Eye Miller: The great detective let her go! Helped her change her name! They even changed her face!