Defend Tyria from the Elder Dragons' rampage. Contains story from Episode 5 of the Icebrood Saga, "Champions". 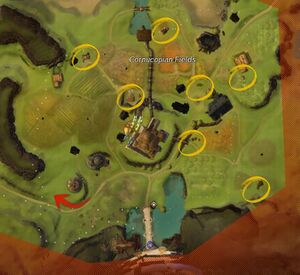 Section-stub. This key section of the article is incomplete. You can help the Guild Wars 2 Wiki by expanding it.
Reason: Missing npcs

2 If supported by the Deldrimor Dwarves

1 If supported by the Norn

After Defend Cornucopian Fields and the entrance to Lion's Arch from destroyers.
Marjory Delaqua: Oh, gods. Destroyers on the move! They're swarming the Ascalonian Settlement! Where are those reinforcements?
Jhavi Jorasdottir: Fall back to Lion's Arch! You know we can't save everyone.
Marjory Delaqua: These settlers lost everything once already, Jhavi. This isn't what I signed up for. And neither did you.
Jhavi Jorasdottir: Aaah—DAMMIT. Vigil, reinforce the settlement! Move it!

When Jhavi arrives at Ascalonian Settlement
Jhavi Jorasdottir: We need to cut off those destroyer tunnels! Don't give them a chance to regroup!

After 5/5 destroyer waves defeated
Jhavi Jorasdottir: Whoa—giant destroyer on the field! Looks like we got their attention!
Marjory Delaqua: Could use some help over here with the big guy!

When the Destroyer of the Great Bridge is at 40%
Marjory Delaqua: More destroyers popping up! Watch your feet and stay on the move!
Jhavi Jorasdottir: Destroyer reinforcements! Don't let 'em get the drop on you!

After the Destroyer of the Great Bridge is dead
Jhavi Jorasdottir: I think that was the last one. Drove 'em back for now.
Jhavi Jorasdottir: Next time I give you an order, Jory, I need you to follow it. If we want to beat Primordus—
Marjory Delaqua: We aren't just fighting Primordus. When we win, we need to be able to live with the decisions we made.
Marjory Delaqua: If we abandon the weak, what's that say about the world we're fighting for? What's even the point?
Jhavi Jorasdottir: And if we all die fighting, those ideals won't matter. There's a line. We need to be on the right side of it.
<Character name>: And today we were. Primordus tried to surprise us. He failed. Good work, all of you.
Marjory Delaqua: You too, Commander. And thanks.

Optionally talking to Jhavi
Jhavi Jorasdottir: I swear by Raven's eyes, if Jory doesn't listen the next time I give an order...

She has a good point, I think.

Why do you think the destroyers targeted this settlement?

How are things holding up with the Vigil?

Jhavi Jorasdottir: After Drakkar, I needed to get away from the Marches. I went on a tour of Vigil encampments around Tyria.
Jhavi Jorasdottir: Mostly a morale thing. I figured Laranthir would've come back by now. He hasn't.
Jhavi Jorasdottir: Never thought I'd be in charge for this long. But the days keep passing and here I am. So I'm getting used to it.

The Vigil's lucky to have you leading them. Take care.

Optionally talking to Marjory
Marjory Delaqua: Thanks for coming, Commander. That nearly got out of hand.

Why would Primordus target here instead of Lion's Arch?

Marjory Delaqua: You don't have to be a killer Krytan sleuth to see this settlement is a more attractive target than Lion's Arch.
Marjory Delaqua: Primordus causes destruction. It's his MO. No better way to do that than set fire to the most vulnerable.

What were you doing in the area?

Marjory Delaqua: Taimi sent word this was a possible emergence point for Primordus's goons. We just got lucky this time.
Marjory Delaqua: Well, not "lucky," but, you know.

You did great work here. Thank you.