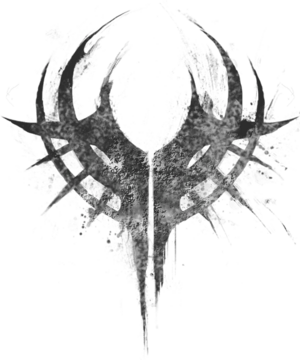 An emblem seen in multiple bandit camps in Central Tyria.

Bandits are part of a large, loose-knit community of criminals in Tyria, typically grouped together outside the reach of various law enforcement groups found in Tyria's major cities. Like pirates, bandits exist to get rich by stealing from or killing their marks. The life of a bandit is typically violent and short, and most of their ranks are garnered from the poorer ranks of society who have few options to earn gold through legitimate means.

Bandits are outlaws found in Central Tyria, the Crystal Desert, and the Heart of Maguuma.

The Central Tyrian bandits have joined forces in a sizable but loose organization to rebel against Queen Jennah's regime.[1] Though initially appearing to be a collection of independent or semi-independent gangs striking out on their own, a common symbol can been seen adorned in or near several bandit camps, suggesting that they are more organised than it first seems. The bandits' influence stretches as far west as the lawless northern regions of the Tarnished Coast as well as the Maguuma Wastes and the Heart of Maguuma, while unrelated desert bandits have carved out a territory in the Crystal Desert and Elona. The Tyrian bandits have been known to collaborate with other factions such as the Centaur alliance, and with the Inquest and the Nightmare Court as part of the Sinister Triad.

When not ambushing travelers or robbing caravans, bandits of the Crystal Desert and Elona can often be found at Brightwater Inlet betting on local mount races.[2]

The bandits of Central Tyria began plaguing the countryside near the Krytan capital of Divinity's Reach since 1324 AE. Initially, they stuck to raiding caravans far from the capital, but their attacks started becoming more bloodthirsty as they moved toward the city, and more political in nature as well—in particular, they directed their ire toward those loyal to Queen Jennah.[1]

By 1325 AE, the bandits operated on multiple fronts, even infiltrating the capital itself where they attempted to poison the water supply, assault the Vanguard Hospital and the Queen's Heart Orphanage, kidnap citizens, while collaborating with corrupt authorities such as Commander Serentine of the Ministry Guard and Julius Zamon of the Krytan Ministry to cause more chaos in order to make the queen's regime look weak. They forged an alliance with centaurs in the Centaur War, supplying the centaurs with both materials and enslaved villagers both in the countryside as well as in Legate Minister Caudecus Beetlestone's manor grounds. They also began negotiations with the Inquest and the Nightmare Court to form the Sinister Triad in the Brisban Wildlands. The Shining Blade discovered that at least one bandit group, Jannaj's bandits, was a White Mantle cell.

Fort Vandal, a notable bandit stronghold in the Brisban Wildlands, was abandoned in 1327 AE when the fort came under assault by the Mordrem which had begun expanding to Central Tyria from the Maguuma Wastes following the Elder Dragon Mordremoth's awakening. Several forts in the wastes met the same fate with some surviving bandits fleeing to Remnant's Retreat, while the bandits also lost a profitable location for black market copper trading as the Mordrem assaulted the Town of Prosperity.[3] After the war against Mordremoth had concluded in 1328 AE, mercenaries working for the Pact raided a bandit fort deep within the Forsaken Thicket in the Heart of Maguuma and learned that the bandits had been using the base for decades in collaboration with a sizable force of White Mantle to bring in prisoners as workers and as sacrifices to empower the Maguuma Bloodstone.

In 1329 AE, proof surfaced of many bandit leaders having close ties to the White Mantle when badges were recovered from the bodies of high-ranking bandits whom the Shining Blade had been hunting. The bandits joined forces with the White Mantle and the Harathi centaurs during the Siege of Divinity's Reach in 1330 AE but their coalition was quickly defeated when the combined forces of the Seraph, Shining Blade and legionnaire Nylia Steelpaw's warband counterattacked and took down the coalition's notable leaders.

Disengage
"Until next time!"