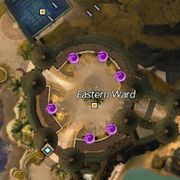 The Eastern Ward is a section of Lion's Arch. It contains Coriolis Plaza, the newly built asura gate hub to the five racial capitals, as well as The Vaults, the new Black Lion Trading Company Headquarters. The ward is accessed by going east from the Grand Piazza or across the bridge over the Inner Harbor from the Postern Ward.

Boost Enchantment Researcher (in the Vaults)

Edda: I'm taking a chance hiring you. If you weren't so cheap...
Melydiod: I understand.
Edda: My contact in Rata Sum says the parts will arrive next week.
Melydiod: Okay.
Edda: We have to get the storage space ready for it.
Melydiod: Got it.
Edda: And don't forget to fill out the inventory sheet properly this time.
Melydiod: Yes ma'am.
Edda: We should get going. Come along.

Scratch: Hey, nanny. When's food?
Nanny: Where you kits been?
Snikk: Just up there. Playing in the sand.
Nanny: We'll eat soon. And stay close. The Lionguard take stray orphans and put them in boxes.
Snikk: Aww, okay.
Scratch: Pffft.

Snikk: Hey, what's that?
Snikk: Look! It's a rat!
Scratch: Is it dead?
Snikk: I don't know. Come poke it.
Scratch: No, you poke it.
Snikk: Okay.
Scratch: Do it.
Rat spawns.
Scratch: Is alive!
Rat chases Snikk.
Snikk: Let's skedaddle!

Scratch: Huuuungry!
Snikk: I know. Let's go get an apple.

Scratch: Eep!
Lookout: Hey! You kids! Get away from there!
Snikk: Gah! Run!

Traveler (male norn 2): I hate how it tingles.

Traveler (male norn 3): Not how I remember it.

Traveler (male norn 3): Gotta get out of here.

Traveler (male human): What a trip.

Traveler (male human): I have to keep moving.

Traveler (male quaggan): Made it.

Traveler (female sylvari): Where to now?

Traveler (female sylvari): Is this the gate to...

Traveler (male sylvari): I know you.

Traveler (female charr 1): So this is Lion's Arch.

Traveler (female charr 1): Until next time.

Traveler (female charr 1): I better have the right gate this time.

Traveler (male skritt): Not my cup of fleas.

Traveler (male skritt): Get out of my way.

Veteran Traveler (female asura): I'll show him when I get there.

Lionguard (charr): I'm gonna ask for a transfer.
Lionguard (human): You're trying to distract me.

Lionguard (charr): You're a pain in my tail.

Citizen (1): If Balthazar has turned on humanity, why aren't the other gods stopping him?
Citizen (2): Because they are gone.
Citizen (1): No, because they agree with his methods. There's always a reason for the things gods do. We just can't always see it.

Door Guard Eian: We better find that dolyak. It's loaded up.

Barkeeper Tin-Eye: All right, that's it for tonight! Everyone out!