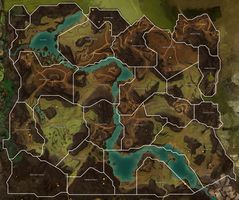 Centaurs have overrun the Hinterlands, violently ousting the local inhabitants. From here, the centaurs send raiding parties to neighboring areas.

The Harathi Hinterlands are the northernmost reaches of Kryta, and are primarily controlled by the centaurs. In 1071 AE, the charr used this area to invade Kryta, and the southern portion was once the Lesser Giant's Basin. It is now a war-torn land, contested by Seraph soldiers supplied by Divinity's Reach via Lake Doric to the west, and the centaurs aided by the Modniir in the northeast. It still holds ruins of ancient Krytan villages.

In addition to those in the table, Forward Scout Greta in High Timber Claim sells the complete set of Modniir weapons at level 43.

Almonds in Bulk from

Cherries in Bulk from