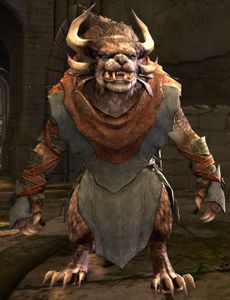 Brevet Talmagh is a charr messenger in The Upper City. He can be seen walking in the Royal Palace, awaiting audience with Queen Jennah. He can also be found in the lower city walking past the District Promenade, near Rurikton, and engaging in dialogue with a group human Citizens under the name of "Mercenary" prior to loading into the Upper City, at which point his identity as Brevet is revealed. Occasionally, he will be present in the Queen's Throne Room, seemingly giving a proposal to the queen.

As a Mercenary in District Promenade
Pathetic little mice. They make me laugh.
(if asura, sylvari or norn)

You're in the wrong city, soldier.

In The Upper City and Royal Palace
You'd best not slow me down right now. Whatever you want, make it fast.

I have a message for the queen. The officer assigned to deliver it is occupied in the field, so I've been promoted for the task. Again.

I won't keep you then.

I know that look. Are the locals getting to you?

I have a message for their queen, but they all look at me like I'm Bonfaaz Burntfur. Thankfully I mostly talk to diplomats who know better. Or, at least, are smart enough to hide it.

What has your fur in a ruffle?

You wouldn't understand. These humans look at an asura and see power to profit from. They look at a charr and see only a threat. Now leave me be. I have work to do.

Why are you acting this way?

Sorry. It's not you, or even my mission. It's the people here. They can't forgive what my ancestors once did to them. I hope you never understand this feeling, sprout.

(If norn or human)

What's wrong with you?

These people only see me as a threat. You wouldn't get it. I'm grateful for Jennah's work on this treaty, but I'll be singed if I want to take a casual stroll through this place.