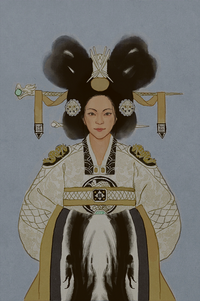 Portrait of Empress Ihn, the second empress regnant of Cantha.

Emperor is a title used among both humans of Cantha and the tengu tribes of the Dominion of Winds. Empress, the female equivalent, may indicate an emperor's wife (empress consort), mother (empress dowager), or a woman who rules in her own right (empress regnant).

Emperor is a title used for the human ruler of the Empire of the Dragon in Cantha since Kaineng Tah united several tribes under his leadership and assumed the mantle of Lord Emperor (Kaineng Chang) in 510 BE, which marks the beginning of year 0 in the Canthan calendar. The term Ascendant Emperor (Kaineng Weh no Su, meaning "Emperor Near to the Stars") has been in use since the reign of Chang Hai from 1 AE (511 CC) onward as each subsequent emperor had to become Weh no Su, Closer to the Stars, either by family tradition or by law.[1]

The emperors of Cantha represent the longest known unbroken line of ancestral succession seen in the world. Historically the Empire of the Dragon has been ruled by the previous emperor's nearest male relation. The title of "empress" was originally bestowed only through marriage and held little real power in the patriarchal Canthan society.[1] This tradition ended during the reign of Haebaragi, the first empress regnant of Cantha.[2]

Emperor is a title used for the tengu ruler of the Dominion of Winds.[3]