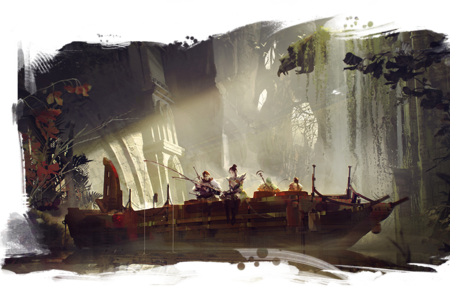 Your personal skiff is your home away from home on the waves. Explore, relax, and ferry your whole party! Drop anchor to fish, walk around, and more.

Skiff is a unique type of movement that allows characters to skiff from one point to another, to fish from it and to carry the owner and up to 4 passengers. It is available exclusively through the End of Dragons expansion.

After completion of Assist the temple in its defense, a skiff can be bought from

Writ of Seitung Province or 700

If you find a spot you'd like to stay in, you can drop your anchor and walk around your skiff!

A skiff can be summoned either from shore or while in the water (at the surface). A skiff only has collision with people of the same party, either them standing on the skiff or running their skiff into another. Players can only stand on a skiff when it is anchored; while in motion, everyone on a skiff is forced to sit. Up to five people can fit on a skiff, with one steering and the other four offering various emotes that can help recharge the endurance bar, which is used to give the skiff a short speed boost.

A skiff has a leash limit of approximately 3,400 units. If the player moves beyond this limit, the skiff will despawn, and all stacks of Fishing Party Catches will be lost.

Skiff turning speed is affected by selected speed, Slow Cruise has fast turning speed while Full Throttle is much slower and Moderate Clip is in the middle between them.

Skiff skins can be unlocked account-wide by purchasing them in the Gem Store. The skins have only cosmetic effects; there are no gameplay advantages associated with them.