Underwater mode is a gameplay mode applied when players dive below the surface of water. Upon entering this mode, characters automatically switch their standard headgear to their Aquatic Headgear and use a separate set of aquatic weapons accompanied by their profession's underwater skills. While underwater, players may explore and engage in combat as usual without any underwater movement penalty or breath restrictions. Underwater mode may be bypassed by swimming along the surface of the water, though the player will have no land or underwater skills while in this state.

When a character's health is depleted, the character enters a drowning state that functions similarly to players being downed. While drowning, players will have access to four drowning skills that can be used in an attempt to rally. However, in addition to the options of killing a foe or being revived by an ally, players may recover by swimming to the surface and achieving full drowning health at which a character re-enters a normal state with 25% health. If the player is attacked while treading water, the health recovery will stop and the player will lose health as in the downed state until one of these things happens: an ally revives them; a foe sinks or pulls them back underwater, in which case they will regain movement and access to the drowning skills; a foe with whom they were in combat dies; or the character enters the defeated state after fully runing out of all drowning health. 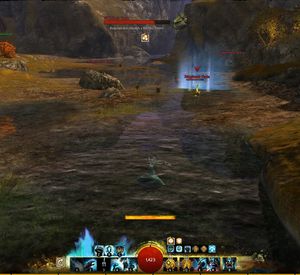 A character's skill bar changes when swimming and when entering underwater mode. While on the surface of a body of water, no skills are available, but the character is still vulnerable to attack. Upon going underwater, a new skill bar is brought up as the character's aquatic weapon is automatically equipped. Each weapon provides profession-specific skills for use in underwater. Players can also set different healing, utility, and elite skills for underwater combat. Skills which can't be used underwater display