This article is about the historical assassin. For the revenant legend, see Legendary Assassin Stance. 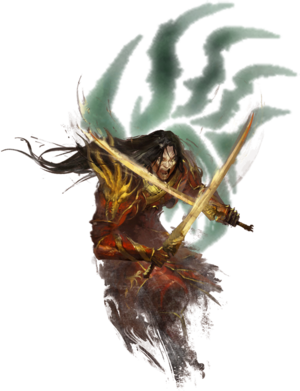 I see great things in your future. Yours will be a story told by generations. Your swords will be sought by many. Yes. Yes. You will do things no other man would dare. Your name will live on for a thousand years. Look for fortune to come your way.

Shiro Tagachi was a key figure in Canthan history who tormented the Empire of the Dragon both in life and death. His first death caused the Jade Wind that devastated much of Cantha and which the continent is still recovering from to this day. Shiro returned centuries later as a ghostly envoy and caused the Affliction in Cantha, and he acted as one of the fallen god Abaddon's generals in the Realm of Torment; he was defeated both times by mortal heroes.

A distant descendant of the first Canthan emperor Kaineng Tah, Shiro Tagachi was originally a loyal and ambitious guardsman. He was noticed by Emperor Angsiyan due to his prowess with weapons and thus invited to join the Imperial Guard as the emperor's favored bodyguard. As a bodyguard, Shiro famously defeated an attack by Am Fah rebels in 1368 CC (858 AE), executing all who surrendered and decapitating their leader. In 1375 CC (865 AE), he rescued Angsiyan's son Prince Hanjai from a cabal of Celestial Ministry rebels, mercilessly slaughtering all the conspirators in front of the boy and later mounting their heads in front of the Ministry without orders from the emperor. Though not often admitted by the government, Shiro Tagachi was an integral part of the peace treaties Angsiyan was forming with the bickering Kurzicks and Luxons, and was the one who convinced their champions to work together and attend the Harvest Ceremony with the emperor.[1] 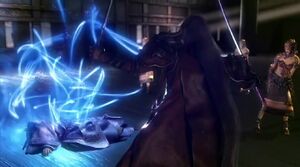 Shiro slays Emperor Angsiyan and consumes his soul and the magic blessed by Dwayna.

During Shiro's service as both a guardsman and later bodyguard, a demon sent by the fallen god Abaddon had disguised itself as a fortune teller and consulted Shiro multiple times, eventually telling him that he would be killed by the emperor during the Harvest Festival, a long-standing annual Canthan tradition where the emperor prayed for the blessing of the goddess Dwayna at the Kuan Jun Temple. Angered by the fortune teller's prophecy, Shiro slew her although he could not stop thinking about her words and if the emperor truly intended to kill him. This caused him to turn to forbidden magic, breaking imperial law, and led him down the path of insanity.[2][3]

Beginning to fear for his life, Shiro became further confused when Emperor Angsiyan began acting oddly during the Harvest Festival, altering protocol and allowing Shiro to accompany him into the temple for unknown reasons. Using enchanted weapons, Shiro slew his master in the middle of the main ritual of the Harvest Ceremony and absorbed Angsiyan's soul along with the powerful magic granted to the emperor by Dwayna through the conduit of his enchanted swords.[4] Shiro killed most of the soldiers that rushed to aid the emperor until only the Luxon champion Archemorus and the Kurzick champion Saint Viktor zu Heltzer remained. Before he could slay the two champions, the assassin Vizu rushed to the scene and crippled Shiro. The sudden attack allowed the two champions to deliver the killing blow, nearly slicing Shiro in half with his own blades.[5]

Shiro's death triggered the Jade Wind, transforming the Jade Sea into literal jade and the Echovald Forest into stone as well as killing the three heroes. After Shiro's death, the Oracle of the Mists turned him into an envoy as punishment, forcing him to guide the recently deceased souls into the Mists. However, Shiro rebelled and refused to carry out his duties, instead plotting to use his new envoy powers for evil. For two centuries Shiro's fellow envoys, themselves once living beings of great wickedness who served the Oracle as penance for their mortal crimes, sought to bring Shiro into the fold.[1]

Shiro eventually learned to use his new power in the creation of an army, unleashing first the Afflicted and later the Shiro'ken upon Cantha in 1582 CC (1072 AE). He sought to return to life by slaying Angsiyan's direct descendant, Emperor Kisu, as royal blood would allow the resurrection. He also corrupted the saltspray dragon Kuunavang to do his bidding, ordering her to guard the Harvest Temple.

While growing his army, Shiro encountered the heroes who had discovered his involvement behind the Affliction and attempted to stop him. The Betrayer unleashed his power and slew the heroes before continuing his mission. Unbeknownst to him, however, the envoys interfered and resurrected the heroes in exchange for the heroes acting as their champions to defeat Shiro as the envoys could not do so themselves. They directed the heroes to seek out help from Suun, the Oracle of the Mists, to pass the test of the celestials and become Weh no Su, Closer to the Stars, in order to see spirits like Shiro and be able to defeat him.[6]

Shiro continued his march, having his minions invade the sacred Tahnnakai Temple where he forcibly bound the spirits of legendary heroes dwelling there to become his Shiro'ken, while the living heroes followed on his heels. Thanks to being Weh no Su, the heroes were able to free the bound spirits one by one, including the famous assassin Vizu herself. Grateful for her freedom, Vizu directed the heroes to seek out holy relics—the Spear of Archemorus and the Urn of Saint Viktor—so the spirits of the relics could help the heroes defeat Shiro.[7]

After acquiring the relics, the heroes returned to Kaineng City where they were summoned to a private audience by Emperor Kisu himself who expressed hope that Master Togo was correct about the two relics being powerful enough to defeat Shiro.[8] The heroes eventually located and confronted Shiro who had been growing in power and had been setting up spirit rifts to summon spirit warriors to his army. They closed the rifts and engaged Shiro in battle while he possessed one of his Shiro'ken constructs. Using the power of the relics, they were able to banish Shiro, although the envoys revealed that Shiro had been dealt a great blow but would eventually regain his strength and return. Realizing that the relics had not been enough to stop the empowered Betrayer, the envoys urged the heroes to seek out both Kurzicks and Luxons and convince them to set aside their differences and join forces so they could assist the heroes in the next battle against Shiro and his growing army.[9] The heroes succeeded in their task to form an alliance with the rival factions and even managed to liberate Kuunavang from Shiro's control. The grateful saltspray dragon promised to lend them her power in the coming battle against the Betrayer. The heroes also learned that each location Shiro had visited previously had been part of an elaborate ritual to cast a complex spell in order to return to life and that the emperor's blood would be his final target. The envoys tasked the heroes with saving the emperor's life.[10]

Assaulting Raisu Palace with his army, Shiro successfully entered the throne room where he cornered Emperor Kisu and prepared to deliver the killing blow. The emperor's half-brother Master Togo prevented the assassination at the last moment by rushing in and taking the fatal hit instead; however, as royal blood also ran in Togo's veins, Shiro achieved his goal and finally returned to life as a mortal of flesh and blood. Wishing to avenge Togo's death, the heroes who had been granted Kuunavang's magical blessing chased after Shiro to the Imperial Sanctum at the very heart of the palace and defeated the Betrayer after a fierce struggle. After Shiro's second death, the other envoys arrived to pass sentence on him, revealing that Shiro had cast off his envoy powers upon resurrecting as a mortal and could now be judged as an ordinary spirit. Furious at being played, Shiro swore revenge and promised to return one day. The envoys took Shiro's soul to the worst prison in the afterlife, whilst Suun, the Oracle of the Mists, turned the Betrayer's physical body into a jade statue.[11][12]

As the heroes entered the Realm of Torment which had been overrun by Abaddon and his demonic servants during Nightfall in 1585 CC (1075 AE), they discovered that Shiro had become one of Abaddon's generals alongside Vizier Khilbron, and that the pair were both guarding the path to Abaddon and issuing orders to the demonic army. The pair had also collaborated to create the Hunter, a special Shiro'ken which Khilbron had imbued with the power of resurrection to effectively make this minion immortal. However, with the help of the Forgotten called Keeper Kauniss, the heroes were able to prevent the Hunter from tracking them so they could slip past him and enter deeper into the Realm of Torment while the Hunter continued searching for the party fruitlessly.[13] Upon encountering Khilbron and Shiro, the heroes learned that Shiro had converted to worshipping Abaddon, declaring with religious fervor that Abaddon would rule the world of Tyria as the only, true god. After a fierce struggle, the heroes managed to defeat Khilbron and Shiro's spirits in the Temple of the Six Gods.[14] Neither Khilbron nor Shiro have been seen since.[15]