This article is about the historical event. For the revenant skill, see Jade Winds. 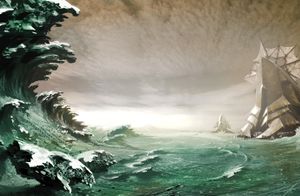 The aftereffects of the Jade Wind.

The Jade Wind was a historical event occurring within Cantha in 872 AE (1382 CC) that devastated the Jade Sea and Echovald Forest. It happened as a result of Shiro Tagachi's death wail, empowered by the corrupted magic of Dwayna, taken from Emperor Angsiyan as he received his second blessing from the goddess.[1]

The Jade Wind spread across the Jade Sea, causing colossal waves reaching hundreds of feet up into the air to form, and be petrified seconds later.[2] Within hours, the shockwave spread throughout the Echovald and the Jade Sea, turning everything from trees to the sea to jade. Leviathans were trapped within the jade and the ancient sea spirit Zhu Hanuku gained a crust of jade on its shell. The Jade Sea's saltspray dragons were also affected and were nearly wiped out by the shockwave save for Albax.[3] The Jade Sea's inhabitants had to adapt to living on the surface of the waves, and among these were irukandji and manta rays.

In the Echovald, the plants and wildlife of the forest suffered greatly from the Jade Wind, and Urgoz and his wardens became enraged at their failure, attacking the local Kurzicks.[4] New homes had to be carved out of stone trees, and amber became a valuable commodity to the Kurzicks who escaped the devastation.[5]

The Jade Wind petrified everything it touched, devastating the southeastern coastal regions. A stone sea holds no food, but it has absorbed centuries of magic. Canthan innovators have long sought practical applications for the material known as "dragonjade", achieving solutions undreamed of in the rest of the world.