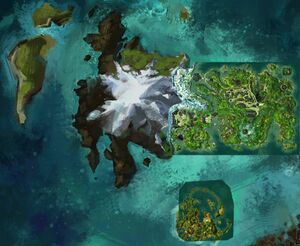 It’s as historically significant as it is tranquil—many of Tyria’s greatest heroes began their journeys here after training at Shing Jea Monastery.

Shing Jea Island (Shining Jewel Island in Old Canthan)[1] is the largest of an archipelago to the west of the Canthan mainland's northern tip. The island is idyllic and rural, and was shared between humans, the native tengu, and yeti.

It is currently where the Royal Court is located within the Shing Jea Monastery and is the residence of Empress Ihn due to the Zhaitan Disaster in Raisu Palace, and of the ancient Kaineng City.

Long before the arrival of humans, the Angchu and Sensali tribes of tengu lived in areas such as the Kinya Province on Shing Jea, sharing the sizable island with the territorial and brutal yeti which lived high on the mountains of Jaya Bluffs.

The human tribes that would become modern Canthans settled the northwestern coast of the Canthan continent and Shing Jea circa 786 BE, long before the arrival of the Luxons and the Kurzicks, and would eventually spead to the rest of the main continent. The Six Human Gods are said to have accompanied these first settlers and helped transplant them to this lush new land.[2][3] Tales tell how gods such as Balthazar and Dwayna walked among mortals in Cantha and other human nations during their travels throughout Tyria but eventually retreated behind the walls of the holy city of Arah in the Kingdom of Orr.[4][5][6]

As Canthans continued claiming land and formed the Empire of the Dragon, the valley of Zen Daijun became a holy place to humans and a destination for pilgrims seeking enlightenment on Shing Jea. The valley was known as the home of Zunraa, an ancient protector that took the form of a kirin. Many weary travelers were buoyed by the restorative properties of Zunraa's ancient shrines. Ringing the bell at any of the shrines in this area summoned Zunraa although the guardian would only keep the bodies of pure-hearted people free of all impurities.[7]

In 1 AE (511 CC), the departure of the Six Gods and the almost simultaneous gift of magic had a profound effect on all human cultures, especially those in Cantha. The heroic professions—their formal practices and requirements still in infancy—became widespread. The eldest prince of the imperial line, Chanang, defied the wishes of his father and chose to follow the hero's path. He studied the ways of the warrior and spent four years at a remote temple on Shing Jea learning the holy practices of the monk. He eventually left the temple to perform deeds as a traveling hero, becoming one of the first Canthans to become Weh no Su, Closer to the Stars—a Canthan equivalent to Tyrian Ascension. He was the first ruler to adopt the title "ascendant emperor" upon succeeding his father as Chang Hai.[3]

Hostilities between the local tengu and Canthans beginning to inhabit the region began to grow stronger in 879 AE (1390 CC). Due to this, the Sensali initiated the Tengu Wars, a series of battles taking place over a period of close to two centuries.[8] Though this war eventually ended due to the intervention of Master Togo, it had lasting effects on the local tengu.

Circa the mid-14th century CC, a cult of pirates known as the Crimson Skull began intermittently raiding the rural areas of Shing Jea and in the 200 years following, they began terrorizing more civilized areas.[9][10]

A monstrous plant appeared from within a cave beneath Haiju Lagoon to menace the local villagers, and was seemingly slain many times but reappeared frequently. Tales of it began to be told to children, describing how the Bog Beast of Bokku, as it was dubbed by the residents of the lagoon, would hunt down naughty children and consume them, in order to scare the children into being good.[11]

Within Miller Quang, a local villager's lifetime, the naga population inhabiting the island increased greatly,[12] and as a result, some inhabitants of the island went to battle the naga and made good headway until they encountered a particularly hostile and powerful naga known as Xsshsss Zsss which decimated the party attempting to drive off the creatures. Very few managed to flee Xsshsss and those that survived immediately headed to Kaineng City.[13]

In 1582 CC (1072 AE) the Crimson Skull were lead by Captain Quimang, a former student of Master Togo of Shing Jea Monastery. Their guild hall, Port Kaimu, located in western Shing Jea, was a fortified port formerly belonging to the people of Cantha.[14] Quimang, obsessed with money, initiated a raid on Tsumei Village following an unsuccessful attempt at persuading him to stop his attack on Shing Jea's inhabitants. Following the prevention of the raid, the Emperor's Blade instructed the Hero of Cantha to slay Quimang, and they successfully slew him at Port Kaimu.

At a time when Shiro Tagachi returned as an envoy he began to cause the plague that spread throughout the island creating Afflicted, as part of his army, who began attacking the inhabitants of the island. In that Master Togo along with a student of his took charge of fighting against these Afflicted and looking for the source from which they came.

Some time later a group called the Ministry of Purity led by Minister Reiko took this matter into their hands, seeing that the Celestial Ministry did nothing to solve this problem and began to clean up and exterminate all the Afflicted that they had.

Some time later, when Emperor Usoku rose to power, he took charge of unifying Cantha under the same Empire, exterminating all non-humans, for which the Island was threatened by the native tengu, Yetis and Nagas. Therefore, in the following years, Empress Haebaragi faced the Crimson Skull pirates together with a tengu named Daigo in the Crimson Battle on the Haiju Plains in the year 1741 C.C. (1231 AE), after which the island of Shing Jea was greeted with relative peace. In the following years, the inhabitants of the island built a District and decided to name it the District of Daigo, which is named after the tengu Daigo who fought in the battle.

After the fall of the Ministry of Purity a group formed and called Purists began to roam the island, brainwashing its inhabitants into believing that the Empress is weak.

Shing Jea Island was found to be in relative peace, not to mention the purists and nagas that roamed the island causing trouble. Suddenly, aircraft began to be seen that arrived and fell from the sky all over the island, this caused chaos among its inhabitants who, disconcerted, did not know what was happening, soon the name of this group called the Aetherblades that began attacking the island was discovered and taking control of certain parts, in order to create havens. In that, the Commander along with the Dragon's Watch had also arrived, and they went to an audience with Empress Inh, and agreed that they would be in charge of dealing with the Aetherblades.

It is unknown how, if at all, Shing Jea Island and its coastline were affected by the Rising of Orr, and so this information may not accurately reflect Shing Jea today, instead attempting to document Shing Jea's coastline as last known.

The Zen Nai Falls feed Lake Puang, located northwest of Tsumei Village, with fresh water. A deep hole is located at the falls and connects to all of Cantha by a large subterranean cave system, providing the mainland, which otherwise has very few rivers, with drinking water.[15]

Near this lake lies a large snowy area inhabited by yeti, cut through by Tomaat Pass, a path used by Canthan travelers containing many yeti nests. To the east of the pass lies Sunqua Vale, a grassy plain bordering both the eastern and western mountains of Shing Jea. West of this area lies Kinya Province, a verdant grassland connected to the shallows of the Unending Ocean.

Within the rocky shallows lies an unnamed shipwreck and Onghsang Island, a small isle known to be the home of the kappa,[16] alongside a group of tigers. The kappa are said to return here every spring.[17] The island is overlooked by both the tengu settlement of Aerie and the Seijun Woods, a forest infested with oversized mantids, a Canthan form of insect.

To the south of here lies Panjiang Peninsula, the southwest peninsula of the island inhabited by many forms of hostile fauna, alongside the vicious Crimson Skull guild. Beneath the snowy peaks is the Raiyan Cave, inhabited by large amounts of naga and containing what seems to be Canthan architecture, suggesting that it was formerly inhabited by the nearby Canthans of Port Kaimu before being captured by the naga. The Qi Falls are also located within this region. The falls are considered to be haunted by locals. The seas bordering Panjiang Peninsula are particularly deep and are inhabited by lion-like amphibious creatures called nian, only to emerge during Canthan New Year.

Northeast are the Jaya Bluffs, a frigid and mountainous region that is largely uninhabited, except for by the local yeti, who appear here in great numbers. The highest point in the mountains is Zuuyun Point, overlooking the beach far below. A large bridge spans the nearby canyon. Further east, the Sungkaa Caverns,[16] an icy cave system, grant access to Haiju Lagoon.

Haiju Lagoon is populated by several small villages and surrounded by shallow water, with a small land bridge connecting Yuroso Island to the mainland of Shing Jea. The lagoon's healing waters are inhabited by two unique forms of plant. The valley and wetlands to the south are guarded by Zunraa, a kirin with a number of shrines dedicated to it scattered throughout the island.

Regions
The World of Tyria
Retrieved from "https://wiki.guildwars2.com/index.php?title=Shing_Jea_Island&oldid=2549262"
Categories: