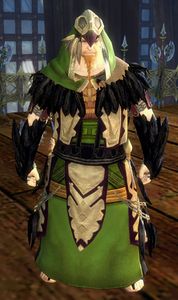 I serve Raven, the Spirit of knowledge and foresight. I make it my business to know those who are, might be, or have ever been, important.

Havroun Weibe is the havroun of Raven, and as such, he is calm and wise, thinking things through carefully. He is not afraid to delve into hidden knowledge that others might consider irreverent, unholy, or dangerous, and he demonstrates this in his pursuit of the mastery of necromancy. Havroun Weibe is honorable and wise, wielding his command over life and death for the good of the Spirits of the Wild. He does not get along with Grechen, havroun of Bear. He is capable of shapeshifting into a common raven, as can be seen at the end of Raven's Revered.

To become the havroun of Raven and prove his worth to the Spirits of the Wild, Weibe underwent the mystic trials at the Raven Sanctum in Bjora Marches.[1] As time passed, he became a respected figure among the norn, and sought out knowledge on individuals who are, might be, or had ever been, important. His dark methods were just and honorable, even with power over life and death as a necromancer. Weibe and Grechen, havroun of Bear, did not get along at all, but both were considered to be experienced spirit-warriors.[2]

In 1325 AE, Weibe encountered Eir Stegalkin, Garm and the Slayer of Issormir. The trio had come to ask for his aid in saving Apprentice Valda and Solvi, havroun of Wolf, who had gotten in trouble with the Sons of Svanir in the Mists. Before accepting the trio's offer, Weibe asked them to help him recover a stolen Raven shrine artifact from the dredge.

After entering the Mists, the party encountered Valda's spirit fighting against Styrr Frostblade's band of Sons of Svanir. After repelling the attackers, they learned from Valda how Styrr had subdued Solvi and was abusing the havroun's power to open portals into the Mists so the Icebrood could track down and assault the Spirits of the Wild for Jormag. Once the party had safely guided Valda's spirit to her bedridden body so they could figure out how to stop Styrr and save Solvi, Weibe wished them luck and bid them farewell as he needed to inform Moda the Quick, Speaker of Raven, about what had transpired in the Mists.

Weibe potentially appeared in the crowd to cheer the Slayer on against Mikkel Toivosson in the Championship Fight later that year if the Slayer had sought out his aid to save Solvi and Valda.

In 1332 AE, Weibe traveled to Jora's Keep to assist the Vigil there against the invasion of the Icebrood and the Sons of Svanir who had taken over the Raven Sanctum. To counter the powerful blizzard and the Icebrood Construct which the Fraenir of Jormag had summoned with Raven's stolen magic, Weibe began a ritual to keep Jora's Keep safe from the storm while attempting to summon Raven to clear the skies. The Vigil and helpful adventurers defended Raven's shrines and battled the fraenir's forces, buying the havroun enough time to gather energy and successfully finish the ritual. As the Icebrood Construct fell, the exhausted Weibe witnessed Raven appearing in the sky to clear the blizzard.

In Bjora Marches
The ambush on the keep was just the beginning. The fraenir will continue to attack unless we make our stand. I'm asking Raven to send us aid.

You think the Svanir will attack again?

We're weakened. Our numbers thinned. Those of us left are hearing things. If I were the Svanir, I'd make my move.

We should be prepared, then. I'll do my part.

Then we should get ready to defend.

During Help prepare Jora's Keep defenses for an icebrood attack
A blizzard like this—it's not natural. The fraenir plans to attack. I can summon Raven to clear the skies, but I'll need your help.

What do you need me to do?

The ritual has not yet begun. Help build up defenses so we can survive any icebrood attacks while I summon Raven.

I need to get going.

If the Storms of Winter meta event succeeded
We did it. Raven has blessed the keep and driven back the storm. For the time being, we're safe.

They'll be back. But for now, it was a victory.

If the Storms of Winter meta event failed
Raven won't return to us for a while. I summoned the last of my energy to repel the attackers, but I worry it won't hold. Not without Raven's help.

You did what you could. We'll fend them off as many times as we need to.

Come soar with Raven.
I am honored to meet you.
If you have the time, I have much to share.
Raven sees all, knows all.
Seeking wisdom? Seek no further.

During Into the Mists

Good hunting!
Ho, traveler!
The Spirits of the Wild welcome you.
Up for a challenge?
You must visit more often.