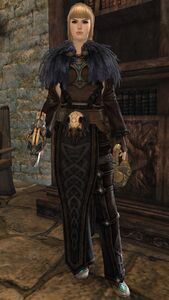 DRAKKAR! I am Jhavi! Blood of Svanir, a daughter of Jora! You know why I've come, yet you cower in the ice! Face me, and let us finish what you started!

Warmaster Jhavi Jorasdottir is a norn necromancer,[1] follower of Raven, and one of the leaders of the Vigil.[2][3] Descendant of the great norn hero Jora, Jhavi has spent her entire life living in the shadow cast by her great-grandmother's legend. As one of the leaders of the Vigil, it is sometimes difficult to differentiate between respect she has earned and respect her lineage demands.[4]

Section-stub. This key section of the article is incomplete. You can help the Guild Wars 2 Wiki by expanding it.
Reason: Missing details from story missions in the Icebrood Saga

Jhavi is the great-granddaughter of Jora and a follower of Raven. At some point she joined the Vigil, and Vigil members in Hoelbrak can be seen using this to promote interest in the Vigil to other norn,[2] calling Jhavi a 'Vigil leader,' although, aside from reporting directly to Almorra Soulkeeper, she does not seem to have much of a leadership role.[5]

Jhavi was a Warmaster in the Vigil Keep, with Warmaster Yosif reporting to her. She reported directly to General Almorra during this time,[6] and eventually they came to be good friends.

After Almorra's death, Jhavi took temporary command of the Vigil, but confessed to the Pact Commander that she hadn't been supposed to take over the keep for years, and that she didn't feel ready.[5]

In Vigil Headquarters
The whisperings from the Mists grow more urgent with each passing day. I hear your name from time to time.

Don't believe a word of it.

In Jora's Keep
To hear Jormag speak like that...it chilled me to my core. But thanks to you, the fraenir is gone and we can begin resist Jormag's influence.

We'll resist it together. All of us.

In Spirits' Refuge
Once we've cornered Drakkar, it won't stand a chance.

I'll get back to it.