This article is about the norn deities. For the in-game book, see Spirits of the Wild (object).

Spoiler alert: The following text contains spoilers relating to the personal story and The Icebrood Saga. 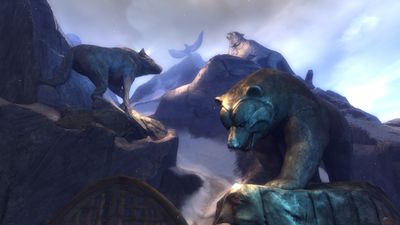 From left to right: Wolf, Raven, Snow Leopard, and Bear.

The Norn do not know gods, at least not in the way humans do. But we do revere the spirits of the animals upon whom we depend for food and shelter. There are many such spirits. Bear is the mightiest of course, but Raven, Owl, Wolf, Wurm, and Ox all have their place in the world and in our hearts. While we hunt and slay these creatures, we also praise their spirit, and thank them for their sacrifice. The animals are our brethren; their spirits guide us as we live and hunt.

The Spirits of the Wild are the norn's spirit guides. Unlike the Six Human Gods, the Spirits do not represent broad-minded concepts like "war" or "nature," but instead embody all the complex virtues and vices of the animals they represent. Likewise, the Spirits are not worshiped in the traditional sense of the word, but rather revered. The Spirits of the Wild have always been around to guide the norn, and though they do not always offer their aid directly, they always aim to help—if they do nothing after being asked for help, then their help was not necessary. The Spirits also keep the norn in check, teaching them not to despoil the land and effectively become a balance to the norn's direct, quick-tempered natures.

Section-stub. This key section of the article is incomplete. You can help the Guild Wars 2 Wiki by expanding it.
Reason: Expand history with events from Guild Wars 1.

When the Elder Dragon Jormag first awoke in the Far Shiverpeaks and pushed south since 1165 AE,[1] the norn initially fought it and would have risked their own extinction, but the Spirits of the Wild prevented them from doing so. The most highly regarded Spirits, oft called the "Great Spirits"—Bear, Raven, Snow Leopard and Wolf—led the norn exodus, guiding the norn south from the Far Shiverpeaks to the place now known as Hoelbrak in the Shiverpeak Mountains.

Four other Spirits—Ox, Eagle, Owl, and Wolverine—battled Jormag in order to give the norn time to move south.[2][3] Owl was confirmed dead by its havroun. However, because the other three Spirits have not had a havroun to communicate with them for generations, their status remained unknown.[4] Other lesser Spirits of the Wild exist as well such as Minotaur and Hare. Some of these Spirits are rarely mentioned, however, such as Frog, Gorilla, Griffon, Mink, Otter, and Wurm.

At some point in the past, Bear, Raven and Snow Leopard gave their respective blessings to Wolf's map which was in Captain Romke's possession. When the Spirits were invoked, the map could display everything between the traveler's current position and the destination they wanted to reach. However, the boastful norn crew's voyage came to a sudden end due to the Rising of Orr which was caused by the Elder Dragon Zhaitan's awakening in 1219 AE. The map was lost in the crew's battle against the Risen, and the slain crew members' ghosts were cursed to haunt the shores of Orr until the map was retrieved and the Spirits had forgiven the crew's pride.[5]

Section-stub. This key section of the article is incomplete. You can help the Guild Wars 2 Wiki by expanding it.
Reason: Expand history with events from personal story.

By 1332 AE, many Spirits of the Wild became more active in opposing Jormag's spreading influence. Raven helped guide the Pact Commander's party to rescue Jhavi Jorasdottir in Bjora Marches and helped Havroun Weibe cast a protection spell on Jora's Keep to drive away the unnatural storm raised by the Fraenir of Jormag. According to Jhavi, Raven may have also ensured that Jhavi and General Almorra Soulkeeper discovered the ancient Raven lenses in Darkrime Delves so they could gain access to the Raven Sanctum and stop the fraenir's plans.[6] Sons of Svanir and the enigmatic Aberrant and Fallen found throughout Bjora Marches showed signs of being infused with the essences of Resilience, Valor, and Vigilance which appeared to correspond with Ox, Wolverine, and Eagle, respectively. Whether this meant that the three lost Spirits had fallen to Jormag or not remained unclear, however, although the Spirits' abandoned shrines were covered in shadow throughout the region.

Norn who choose to become shamans devote themselves to a Spirit's sacred area: a shrine, lodge, or hunting ground dedicated to their patron Spirit of the Wild. The shamans serve their people as guardians and teachers, protecting their territory and instructing others in the lessons of the Spirit they revere. Four of the most powerful and dedicated shamans are known as the Speakers of Hoelbrak. They tend the four lodges that flank Hoelbrak's main hall, which were raised in honor of the four Great Spirits that led the norn to safety during the norn exodus. Special norn shamans called havrouns tend to the Spirits' needs and are capable of crossing over to the Mists at will without the use of portals (a technique known as spirit walk) to join their respective Spirit. Every norn can become a shaman of a certain Spirit, but only one norn can become havroun of one Spirit.

Although the four Great Spirits worked together to help the norn survive Jormag's attacks, they—or their followers—are not always on the best of terms. Followers of Wolf scorn Snow Leopard's stealth as "cowardice," and the shamans of Bear have been known to mistrust Raven's adherents, calling their deceptions dishonorable and weak. Tales of epic battles between heroes of each lodge are told at moots, immortalizing in legend both the virtues and vices embodied by their patron spirits.[4] Some shamans embrace the darker teachings and aspects of their patron Spirit, pursuing goals which can end up harming others on purpose such as the Raven witch Vilnia Shadowsong capturing and sacrificing children in macabre blood rituals to gain more power and wisdom, but these wayward shamans are often reviled in norn society for their crimes.

Some Spirits exist which the norn consider unworthy of reverence; these naturalistic forces include Mountain, Seasons, Fire and Darkness. These Spirits are not seen as sentient and are depicted as challenges for the norn to overcome rather than friends or guides like the Spirits of the Wild.

The Sons of Svanir regard Jormag as the greatest Spirit of the Wild and refer to it as "Dragon", which they view as the embodiment of all the Elder Dragons. However, most norn and scholars do not regard it as a true Spirit because it lacks traits and powers commonly associated with the Spirits of the Wild.[4][7][8][9]

The norn have the ability to shapeshift, adopting the form of the animal after the Spirit they revere. While transformed via this totem ability, the norn become closer to the spirit of the form they take and understand the power of the wild. The Spirits of the Wild can grant and revoke blessings on the norn based the norn's deeds; it is debated among the norn and scholars whether Jora's inability to Become the Bear after Svanir's acceptance of Jormag's power was caused by Jormag punishing her for rejecting its power or by Bear punishing her for doing nothing to stop Svanir,[10] but Jora did ultimately regain her ability after honoring Bear's wishes to restore her bloodline's honor.

The Spirits of the Wild are the embodiments of the beings associated with them. As patron spirits, their existence or demise can thus have a great effect on the beings linked to them via this bond. For example, Owl's death reportedly made all owls weaker and more confused.[11]

The Spirits of the Wild are very invested in the norn. A Spirit feels a kinship with those norn who have embraced that particular Spirit. When a person bonded with the Spirit dies, the Spirit knows and feels it. When an entire swath of any Spirit's shamans are wiped out, that Spirit feels that pain in a very keen sense like its children are dying.[12]