This article is about the point of interest. For the hero challenge, see The Mouth of Torment (hero challenge). 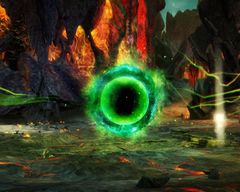 The Mouth of Torment is a twisted crater on the former shoreline of the Crystal Sea. When Abaddon rebelled against the other five gods, it was here that the final blow was dealt and Abaddon's defeat made certain. Once a beautiful land, it has been twisted by the energies of Abaddon seeping in from the Realm of Torment, slowly spreading the toxicity of the sulfurous wasteland that makes up The Desolation.

For a millennium, an orb of tormented energies floated above the land where Abaddon's former armor and sword were nestled in the crater's walls. But in 1075 AE, Warmarshal Varesh Ossa performed a ritual to enhance Abaddon's reach into Tyria, calling the old remnants of Abaddon into the Realm of Torment itself. Though Varesh was killed in the attempt, the ritual was a success, tearing open a rift into the Realm of Torment and further connecting the world with the fallen god's prison.

In the two centuries since Abaddon's death, the landscape remains twisted—perhaps even more than before—with monstrous mouths stretching out of the crater walls. However, the rift has shrunk, and though a portal to the Nightmare Realm still remains, the massive hole in the ground now has both soil and metal covering it, leaving only a small crack where one may gaze into a star-filled void.

The Desolation
Retrieved from "https://wiki.guildwars2.com/index.php?title=The_Mouth_of_Torment&oldid=2143728"
Categories: