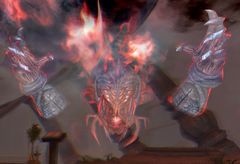 Race
God
Location
Facing the Truth
(Tomb of the Primeval Kings, The Sanctum)

Act with magic, act within reason, act without mercy.

Abaddon was one of the Six Gods, a fallen predecessor of Kormir. He was the God of Knowledge and Water,[1] titled Keeper of Secrets and Lord of the Everlasting Depths, and associated with the watery depths, knowledge, and magic. He was succeeded by Kormir, while Lyssa later adopted dominion over water. Like other human gods, Abaddon also had a temple in Orr, the Cathedral of Hidden Depths, which now lies sunken in the Straits of Devastation. After his fall, he was primarily referred to as the God of Secrets.

Before his fall, he was described as a handsome, calm figure with imposing eyes and wings as blue as the ocean. But over time his appearance changed; his eyes were replaced by sunken, abyssal shadows and his wings became scythe-like and bloodied. This change of appearance was a direct representation of his heart.[2] By the time of his return in 1075 AE, he was just a giant head and two hands with grisly, insectoid features and sinewy skin.

Abaddon's past is shrouded in mystery. However, according to the Margonite Apostate, Abaddon gained his power from an older, deposed god.

The writings of the Orrian history scrolls suggest that Abaddon was among the gods who emerged in Tyria from the Mists and introduced the world to humanity whom they had brought with them. Although the gods were initially drawn to the magic of the Artesian Waters in the heart of Orr, they took humanity with them to Cantha in 786 BE, planting the seeds of the first thriving human civilization in Tyria.[3][4][5][6] Humanity proved to be resilient and spread to Orr, Elona and beyond in the following centuries.

As the city of Arah was being built in Orr, the gods wanted a safe place to store various powerful relics and secret knowledge in. Abaddon designed a set of reliquaries in Siren's Landing to hold these valuable items. Each reliquary was given to its respective god with Abaddon's Reliquary as the centerpiece, all connected in a magical, protective grid to keep them safe from looters and defilers. During this time the gods gathered various powerful and ancient artifacts from around the world, including the original Bloodstone and the Mystic Telescope, and brought them for safekeeping and study in Arah.[7]

At some point the gods became aware of the existence of the hibernating Elder Dragons, who were tied to the magical balance of Tyria, and learned their names and spheres of influence. This information was documented in what would come to be known as the Scroll of the Five True Gods.[8]

The gods lived for a time among their followers in Arah. However, their radiance blinded mortals who gazed upon them for too long whenever the gods appeared among their followers. The gods eventually decided to retreat from public, and Dwayna, the Goddess of Life, commissioned the Orrian sculptor Malchor to make a statue of each god. As the statues were completed, the respective gods depicted in the statues retreated into Arah one by one.[9] Around 48 BE, the old and tyrannical God of Death, Dhuum, was overthrown by Dwayna's half-god son Grenth who ascended to godhood and was welcomed by the gods as the new member of the Six.

According to an ancient Ascalonian legend and an Orrian scroll, the gods formulated a magical ritual and gifted three holy artifacts needed to enact and reverse it—a magical crown, Balthazar's own sword Sohothin and its twin Magdaer—to the royal human lineage as protection against invasion. The artifacts, as well as the knowledge how to use them in the ritual, would eventually pass on to the Ascalonian line of human kings.[10][11]

In 1 BE, the Six decided to gift magic to the mortal races. The gift of magic made the mortal races greedy, however, and led to devastating wars. King Doric, who had become the ruler of Tyria's united human tribes, journeyed to Arah and asked for the Six to put an end to the bloodshed. In response to the king's plea, the gods shattered the original Bloodstone and divided the magic in the world into five lesser Bloodstones to prevent anyone from ever wielding power over all magic again. According to the History of Tyria, the gods sealed the stones with Doric's blood and placed his bloodline in charge of guarding the stones.

Abaddon turned against his fellow gods because of a disagreement over the gifting of magic among many other escalating events that followed the sealing of the Bloodstones. The rebellious god and his army of Margonites were defeated after their failed assault; however, the gods' victory came at the cost of the Crystal Sea turning into the Crystal Desert and a once plentiful land becoming the sulfurous Desolation.[12] Abaddon and his Margonite followers were cast out of Tyria into the Realm of Torment, a realm within the Mists which would act as his prison, as his power could not be destroyed. Balthazar himself forged the chains that bound Abaddon in his prison. Afterwards, the gods erased almost all knowledge of the fallen god and departed the world of Tyria in an event known as the Exodus of the Gods, which the Mouvelian Calendar is based on. The Forgotten race would then stand watch over Abaddon's prison.

While imprisoned, Abaddon began plotting to break free. He was responsible for many disasters which plagued Tyria, including the Searing of Ascalon, the Cataclysm of Orr and the Jade Wind of Cantha. His influence was also felt in many tragedies which occurred indirectly as a result of those events, such as the occupation of Kryta by the White Mantle and their mursaat overlords, which led to the Krytan civil war. Abaddon created strife against and within the human race for many centuries, using titans to manipulate the charr in their invasion of northern human kingdoms of Ascalon, Kryta and Orr, and ultimately causing a civil war in Elona which, aided by Warmarshal Varesh Ossa and other humanborn worshipers, nearly resulted in his release.

The other deposed human god, Dhuum, and the evil half-brother of Balthazar, Menzies, formed an alliance with Abaddon during this time and aided him in his efforts on almost all fronts, especially in the Mists.

In 1075 AE, over a thousand years after his first defeat, the maddened god was close to breaking free from his prison, a plan which was undone by the Order of the Sunspears and Order of Whispers in Elona. Abaddon was finally destroyed for good as Spearmarshal Kormir absorbed his power, becoming the Goddess of Truth and preventing Abaddon's former power from running rampant.

Since Abaddon's attempted return—known from prophecy as the Nightfall—and ultimate death, nothing had been heard of Abaddon's followers or allies for centuries. However, interest in Abaddon remained, and the Durmand Priory dedicated a hidden Special Collections section of their library to closely guarded knowledge with a statue of Abaddon standing guard at the entrance. One of the last remaining vestiges of Abaddon's power was his abiding hatred of dance, and dancing in front of Abaddon's statues throughout Tyria and the Desolation could severely injure or otherwise incapacitate the dancer.

In the wake of Nightfall, remnants of Abaddon's tormented magic left by the Margonites' presence seeped into the Crystal Desert. Left alone, this magic would coalesce into tormented remnants over time. To cleanse the Desolation of Abaddon's corruption, the djinn gathered at Sand Jackal Run and took to reshaping this tainted sand into jackal-shaped constructs. The djinn imbued their magic into runes taken from the bodies of tormented remnants to tame the tormented energies, and in turn the jackals. These jackals were feral and hostile initially, and still sought to bring about Nightfall. Once tamed, it was said that the eyes of the jackal were all that remained of their Margonite forebears.[13]

In 1325 AE, the Elder Dragon Zhaitan sent its Risen minions to search for a hidden magical artifact located in Abaddon's submerged temple in the Straits of Devastation. However, it was unable to get a hold of the artifact as the temple was destroyed shortly after a fight between the Risen and the Pact Commander and Sayeh al' Rajihd.

In 1330 AE, the first modern day Priest of Abaddon was seen exploring Orr's revealed reliquaries in Siren's Landing and discovering hidden texts about the fallen God of Secrets. Thanks to the Pact Commander's assistance, the priest managed to decipher texts pertaining to Abaddon's mysterious parable. 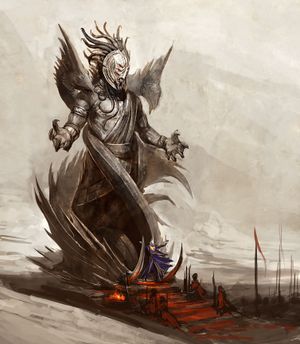 And so it came to pass that Jadoth, being persecuted by the horrific Forgotten armies, and hounded from his home, did seek refuge among the cooling mists of the Crystal Sea. Untold weeks passed as Jadoth huddled in his sanctuary, with nothing to see save the endless ripples of the boundless ocean.

On the 51st day of his exodus, a frightful sight manifested before Jadoth's eyes: the unmistakable shape of Forgotten warships upon the horizon's shimmering edge.

And prayed Jadoth, "Abaddon! Lord of the Everlasting Depths, Keeper of Secrets, open mine eyes and bestow upon me the knowledge of the Abyss that I might smite mine enemies and send them to the watery depths!"

An unsettling silence swept across the waves. The twilight sky shattered and stars streaked down upon the Forgotten armada. The seas boiled and ruptured, and gave birth to a maelstrom from which not even light could escape, and transforming the sky above into a midnight void.

And thus was magic gifted to Jadoth, chosen of Abaddon, the first of the Margonites.

— Scriptures of Abaddon, 1 BE

Among them was Abaddon—once secret-keeper, now betrayer. How you have fallen from the glorious days of old. What passed beyond in the Mists, only you remember.

Abaddon, Abaddon. Your name has been erased from the towers, your cathedral condemned to the sea. Turn your faces away, oh sons and daughters, and let not his gifts tempt you.

And thus, Arah was built, sector by sector, in honor of the gods. It rose into the clouds and sank deep into the ground.

The people of Orr decorated it with gold and gems befitting the gods who protected them.

The gods were pleased, and so it came to pass that the gods came to Orr and made it their home.

With the gods came artifacts, relics, and secret knowledge, and the gods wished for a safe place to store these treasures.

Abaddon—god of secrets, knowledge, and magic—designed a set of reliquaries to hold these priceless items. As a gift, he gave one to each of the other gods and created his own as the centerpiece.

These reliquaries he connected on a magical grid that illuminated them all. Thus, he kept thieves and defilers at bay.

(This copy of the parable has notes in the margin, written by a modern hand.)

Abaddon sent away. Gods wipe the records of him. Childish! Why so many Abaddon relics here if true? Is this even a parable? No mention of reliquaries in the history books. Gods hid it with a magical veil? Did they sink it too? But post-god maps show the region existed. May never know truth. Orr gets sunk, then rises. Veil shredded? Reliquaries revealed. Hehe. Abaddon, Keeper of Secrets, has the last word.