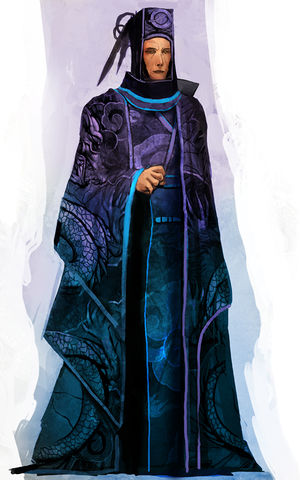 Emperor Usoku was the 32nd Emperor, and the 22nd Ascendant Emperor, of Cantha. He was known for an ironclad regime which annexed the Luxons and the Kurzicks into the Empire of the Dragon, drove out non-humans such as tengu, and promoted isolationist policies.

As the successor to Emperor Kisu as Kaineng Weh no Su, Usoku took a firm hold of his nation in 1637 CC (1127 AE). He raised the Canthan military, spending millions in gold to arm his troops, and then swept the countryside. He defeated the Luxons and the Kurzicks, incorporating these disparate people back into his nation. These efforts were supported by the Ministry of Purity,[1] which had originally been established by Minister Reiko Murakami to combat the Afflicted. During his campaigns Usoku had elite members of the Royal Guard called the Seven Canthan Spears who were viewed as the emperor's best men and women.[2]

Usoku unified Cantha behind a strong national identity and began to purge the lands of rebels, the sick, and any non-humans such as the tengu.[3][4] It was not long before his embassies started to follow isolationist policies. Usoku's regime was ironclad, tyrannical, and fierce. Those Canthans who did not agree with the emperor's dictates were given no choice but to leave their homeland, seeking refuge and sanctuary in Elona and Tyria.[5]

The Luxon delegation sent their surrender in 1637 CC (1127 AE), and the Ministry of Purity's support in the court grew in response.[6] By 1661 CC (1151 AE), the aging Usoku appeared to have become more sensitive to his past actions as he and his allies in the Ministry of Purity began pruning, withdrawing and destroying most mentions of the Ministry's purges to cover their crimes and depict an idealized past of Cantha for future generations. These efforts were opposed by Zei Ri's disciples who intended to collect and save every incriminating scrap they could find before the censors got to them, and distribute these pieces through their network to preserve the truth.[7]

Usoku became the last Canthan emperor whose name was known in Tyria[8] even though Canthan sailors would sporadically wash ashore on Tyrian beaches. Despite Cantha's isolationism, however, the Empire of the Dragon continued trading with at least the Kingdom of Kryta's ships sent from Lion's Arch until the Rising of Orr and the emergence of the Elder Dragon Zhaitan's Dead Ships cut off Cantha from Elona and Tyria and drowned Old Kaineng City in what Canthans would call the Zhaitan Disaster in 1729 CC (1219 AE).[9] A century of no diplomatic contact between Tyria and Cantha followed,[10] but the Zephyrites were hinted to have traveled to Cantha and traded with the locals there as recently as 1837 CC (1327 AE).[11][12] According to the Zephyrites, Cantha had been one of their "most culturally colorful ports of call," implying that Cantha's cultural side had only prospered in the following years.[13]

In the decades following the Zhaitan Disaster, support for the Ministry of Purity gradually waned in Cantha until the ministry was disbanded in Empress Haebaragi's sweeping governmental reforms.[14] Usoku appears to have fallen into disfavor due to his support of the now vilified Ministry of Purity, and a watchtower dedicated to him in northeastern Seitung Province was left to be ravaged by the elements.[15]