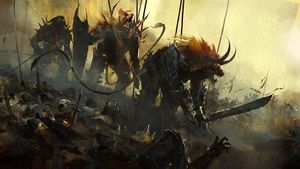 A warband on a tour of duty.

I am charr. My warband is to me what humans would consider a family. We were raised together as cubs in the creche, in the fahrar. We were trained to fight together as a unit. We may not share blood, for we honor our elders and forebears, but the bonds of battle hold stronger than any family tie.

— Ember Doomforge in Ghosts of Ascalon

The warband is one of the most important aspects of charr culture and the backbone of the High Legions. It is a unit typically led by a legionnaire and usually has five to fifteen members.[1] Warbands are mostly known for performing military duties, but many warbands can also be found performing non-combat service on the home front such as farming, mining, logging and ranching. Warbands serve as the primary social group—and the only family—that young charr of Central Tyria will ever know.[2]

Most warbands are led by legionnaires, though sometimes centurions can be seen leading their own warband. Centurions are also in charge of multiple warbands that form a company; in areas where multiple centurions are coordinating, a primus centurion—the "first among equals" of the centurions—might be appointed and lead an active assault force of three to five large companies. In even rarer cases, tribunes can lead smaller warbands as well, such as Tribune Kyranith Steelgrip of the Iron Legion. The primus warbands are always led by the imperators of the High Legions themselves, and the leaders of these respected warbands have traditionally been direct descendants of the Khan-Ur.[2]

Warbands typically have five to fifteen members, but can grow up to twenty or even beyond that such as how Rytlock Brimstone's renowned Stone Warband had up to two dozen members at one time.[1][3] When a warband becomes large enough, the legionnaire usually splits the warband into two separate warbands.

If a warband suffers severe losses in battle or in an accident, it is expected that the warband replenishes its numbers with new recruits, typically gladia, who are deemed suitable for the warband via questionnaires or tests of their combat abilities in e.g. the popular Ooze Pit Trials or in various missions where their performance is rated. Surviving warband members are generally expected to consult with one another before recruiting new members although it is possible for a surviving legionnaire, or the next officer in line, to recruit members without consulting if the other surviving warband members are presumed dead at the time.[4]

A charr's loyalty varies from individual to individual. Typically an individual's loyalty will lay with their warband first and the legion second, though it is expected of them by culture to hold utmost loyalty to the legion instead; it is usually only those who strictly follow regulations who hold legion loyalty over their warband. Because of this, if a legionnaire defects, the rest of the warband may follow out of loyalty to the warband.

Typically, charr do not leave their warband for another; however, it is still not uncommon. This can occur due to losing a warband, becoming a gladium, and joining a new warband. A soldier can also be transferred due to the legionnaire's decisions on the soldier being better off elsewhere. When charr change warbands, it is important for the new charr to be accepted and work with the new warband well in order to survive.

It is acceptable for charr to leave the warband of their youth for an extended period of time either due to a promotion or to perform a specific duty ordered by their superiors. In unusual circumstances, charr have even been known to join guilds or orders with other races in lieu of warbands. These charr may be outcasts or they may simply have been forced through necessity to take unusual allies. However, despite their odd allegiances, it is said that no charr ever forgets their loyalty to their respective legion.[1][2]

During their education and training in their legion's fahrar, every young charr is forced to become a member of a warband, usually adopting a surname indicating their membership. For example, they could choose the name Fierceclaw in a warband where members identify themselves with the word Fierce.[2] The warband's name can also be shown as the suffix of the surname; for instance, a member of the Strike warband can be named Swordstrike.

A warband's name is chosen when its members are ready to leave the fahrar. It is also possible to find two warbands with the same name at a time, which often results in a friendly rivalry between both. In some cases the warband may adopt a historical warband's name for themselves to e.g. honor the previous warband's fallen soldiers.[5] If the warband's legionnaire dies or is overthrown and cast out, it is possible for the remaining members to rename the warband.[6]

The four High Legions were originally named after their respective primus warbands (Ash, Blood, Flame and Iron).[2] However, none of the current imperators display any of the primus warband names in their surnames.

Charr players will have and expand a warband of their own during the early stages of the charr personal story. Who joins the warband is based on the legion the player has chosen during character creation as well as during specific choices made in the personal story. For Blood Legion characters the original legionnaire of the warband is Legionnaire Urvan Steelbane, and for Ash Legion characters it is Howl the Brazen. For Iron Legion the original legionnaire is never named. Similarly, the warband's original name is only mentioned for Blood Legion players (Steel Warband).