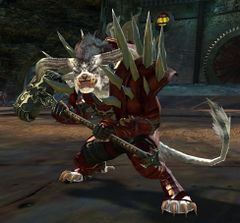 You want my job, you miserable little puke? Earn it. Get down there and fight. Show me what you've got, and maybe I'll show you how a real legionnaire fights!

Legionnaire Urvan Steelbane is a legionnaire of the Blood Legion. He appears during the charr tutorial mission, Fury of the Dead guarding the gates to the crypt, willing to let Rytlock Brimstone die in the crypt by trying to give the player new orders if the gates are shut. If the player joined the Blood Legion, Steelbane is also the legionnaire of the player's warband and appears in Chain of Command and Time for a Promotion. The Blood Legion player will need to defeat him in order to take command of the warband and then decide Urvan's fate, to live or die.

If left alive, true to his word, he is not seen or heard from again.