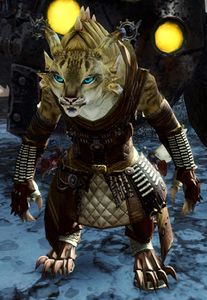 Ranoah Grindsteel is our engineer. Careful around the tank over there; it's her baby. And don't ask her about it unless you want to sit through an hour-long lecture on every last feature of the thing.

Ranoah Grindsteel is a member of Ryland Steelcatcher's Steel Warband in the Blood Legion and has sided with the Dominion along with the rest of the warband. She is an engineer tasked with operating the TT6-B Devourer.

At a young age, Ranoah Grindsteel awoke a group of Ascalonian ghosts in Grothmar Valley by touching a mask, leading to her being reassigned to the Blood Keep for a while, where Quaestor Blackclaw suggested that she be reassigned to work with members of the Iron Legion due to her getting in the way of the other engineers. This suggestion was accepted and she was reassigned to Tuyere Command Post in Fireheart Rise, where she climbed through the rigging in the Pig Iron Quarry to replace a worn gear.

Sometime later, she arrived in Canton Factorium in the Black Citadel where she received advice from a gunsmith. Soon after, she went to Dredgehaunt Cliffs and helped Explorer Gervvid find Dwarven Treasure and defeated a powerful skelk lurking in the Forsaken Halls[1], and soon went to Southsun Cove where she found a Karka Web Gland.

During this time, she remained a member of the Steel Warband, and went out to scout out a Separatist-infested cave with Vishen Steelshot in Craze's Folly, battling the Separatists within it and a strong troll with the Deadeye's help. At the Meatoberfest celebration in Diessa Plateau, she spent some time with Vishen, and she scared Ranoah in an unknown manner. Later at some point, Ranoah started working on the first prototype of the TT6-B Devourer tank, her personal pet project, sending letters to all engineers in the Blood Legion, including Luccia Wildeye, for their input about ordnance.[2]

In 1332 AE, she, along with the rest of the Steel Warband, were chosen to establish a route to the Far Shiverpeaks through a pass. When within this pass, she required the aid of some recruits to the warband to get the TT6-B Devourer tank up and running. While on the route, she discussed going to a Metal Legion concert after they had finished getting through the pass, an offer which Cinder Steeltemper refused. When Nicabar Steelweaver questioned the other charr about Bangar Ruinbringer's ideal of "one charr", Ranoah stated that it sounded good.

At the gate to the ruins of a Stone Summit fort, Ranoah noted to the other members of the warband that the tank would most likely not make it through a storm raging outside, and so the group went through the ruins, requiring Ranoah to harpoon the gate to bring it down. Within the ruins, the group heard an unearthly howl from one of the corrupted Stone Summit dwarves, which startled the Steel Warband members.

Upon reaching a bridge, progress was temporarily halted due to the bridge not being extended enough for the TT6-B Devourer to cross. A group of recruits managed to find seals which extended the bridge, allowing the tank to cross. After crossing, the group encountered the Ancient Forgeman. A fierce battle ensued, resulting in its destruction. Imperator Bangar Ruinbringer appeared after they had defeated the construct questioning them about why they had sent up a flare for aid. Centurion Ryland Steelcatcher left the rest of the warband behind at the entrance to the Darkrime Delves and Ranoah answered some questions a curious recruit had.

In Drizzlewood Coast in 1333 AE, Ranoah was promoted to the rank of centurion and assigned to guard Lighthouse Point, a former human settlement, where she was attacked by United Legions forces. While in her modified tank she was nearly defeated, and Nicabar notified her that the base was lost, recalling her to Wolf's Crossing. There she was hunted down and eventually killed alongside her warbandmates Vishen Steelshot and Nicabar Steelweaver.