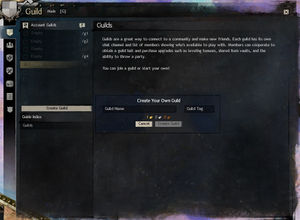 Guilds are a great way to connect to a community and make new friends. Each guild has its own chat channel and list of members to see who's available to play with. Members can cooperate to obtain a guild hall and purchase upgrades such as leveling bonuses, shared item vaults, and the ability to throw a party.

You can join a guild or start your own!

Guilds are formal groupings of players that enable them to play together more effectively and reward them for doing so.

The benefits to joining an already established Guild include:

To create a guild, open the guild panel (G) and click on the "Create Guild" button. You will be asked to enter a guild name (up to 31 characters) and a tag of up to four characters. Guild tags are not unique, but guild names are. Alternatively, speak to a Guild Registrar in any of the major cities. It costs 1

to create a guild. You will be unable to create a guild while representing another, so you must "Stand Down" before creation. The guild emblem may be changed by speaking to a Guild Registrar.

The rank of Leader is automatically assigned to the creator with all guild privileges. The leader may invite additional members and promote them to any guild rank including that of leader. If there are no leaders in a guild then a member with the next highest rank is automatically promoted to leader.

If you are the last member to leave a guild then it will be immediately disbanded, deleted and unrecoverable, including all upgrades and anything in the vault. A guild with the same name can be created immediately afterwards.

Players are limited to creating two guilds per week. For instance, if you disband twice in the same week, you'll have to wait one week from the moment you disbanded before you can create another.

Guild membership is administered at the account level, and an account can hold membership in up to 5 guilds. Joining a guild requires an invitation sent from an existing member of the guild with "Admin Lower Ranks" privilege. Your open invitations can be found on the front tab of the guild panel, on the left, under "Invitations."

Guild membership is not limited to a single world. A guild can have members from any server, whether in the US or EU.

Initially, each guild is limited to 50 members. You can purchase the following capacity upgrades by speaking to a Guild Registrar in any of the major cities or WvW, only if the guild membership is at least 80% of the current maximum size:

You can only send as many invites as 50% [verification requested] of your current member limit. So initially you can only have 25 invites at a time and you need for those invites to be accepted to be able to invite more.

Message after reaching the invite limit

While guild membership is at the account level, guild representation is at the character level, providing access to the guild bank and any active guild upgrades.

To represent a guild, open the guild panel. On the sidebar, the "Account Guilds" tab list of all guilds your account is a member of. Select one and then click the "Represent" checkbox to the left of the guild name. You must do this individually for each character, since joining a guild does not automatically require you to represent it. Similarly, newly-created characters will not represent a guild until you select one for them.

To end a character's representation of a guild, uncheck the checkbox. The character will still belong to the guild, but not be able to use any of that guild's perks.

To change an individual member's rank, open the guild roster and right-click their rank icon. Leaders can revoke leadership privileges from themselves, keep this in mind while editing ranks or promoting members.

1 Be careful administering your own rank, since you can accidentally remove privileges preventing you from further administration.
2 This setting is required to invite new members. Leaders are able to demote others with the same rank.
3 Specifies the rank that new members are assigned when they join.

Treasure Trove Deposit / Withdraw: This pair of permissions also control access to the Deep Cave segment of the Guild vault.

Edit Ranks: this permission allows an administrator to grant or deny permissions:

Admin Lower Ranks: this permission allows an administrator to:

1 & 2 A guild member with either of these permissions has the ability to elevate every underling to their own level of authority.

Guilds can create a Guild Vault, providing 50 storage slots shared by all members of the guild with sufficient privileges. Additional upgrades can be built that increase this space to 250 slots. The Guild Vault is accessed by speaking to a Guild Banker, located near Banks in major cities. It can also be accessed in World versus World by speaking with the NPC Guild Master.

Guilds are strategically important in World versus World. They can build upgrades that provide enhancements to both players (Guild Enhancement: World Experience) and objectives (resource camp, tower, keep or castle). Only objectives that have been unlocked in a guild's War Room may be claimed by those with sufficient privilege. Thereafter, timer-unlocked enhancements that have been completed by the guild become automatically available much faster then automatic objective upgrades. Objective auras are immediately available to all allied players at the objective. The enhancements may significantly improve the defenses of any objective, enabling a team to control objectives longer and more rapidly increase their War Score. 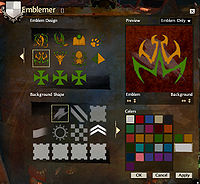 Guilds can build a "Guild Emblem Template" upgrade that allows members with the appropriate permission to create or modify an emblem for the guild by speaking to a Guild Registrar or clicking their emblem from the guild menu. Emblems consist of a two-color symbol overlaid on a single-color background pattern.

After an emblem is created, it will display in the guild panel and on any objective claimed by the guild in WvW. After building the Guild Armorer Contract or Guild Weapons Contract upgrades, members can purchase armor or weapons, respectively, that will also display the guild emblem.

The guild emblem is also displayed on banners:

Added in the Flame and Frost: The Gathering Storm update, these missions require co-operation of guild members to complete. They allow members to earn Guild Commendations and the guild itself to earn Favor.

There are many different types of guilds that are accepting new members. Rather than choosing at random, you may wish to find one that is closest to your personal preferences. Other players, recruiting for their guilds, may frequently post messages in map chat that are visible to all players in a zone. You may whisper (/w) chat such a guild recruiter questions to determine the best match for you (there are limitations on the whisper feature for Free accounts).

Guilds may be loosely split into 3 groups, PvX, "Preference" and "Hardcore". Many guilds try to be all things to all players. These PvX (Player versus Anything) guilds have members interested in all aspects of the game. They are best for newer players who do not yet know what aspect of the game interests them the most. "Preference" guilds focus on one major aspect of the game, while still supporting members pursuing other game aspects. Finally, "Hardcore" guilds ask all members to regularly participate in the aspect of the game which is their focus. If this is your main interest then "Hardcore" may be the place for you.

Some guilds have a focus that isn't related to the type of content they prefer:

Remember, you may join up to 5 guilds per account and use the guild panel to switch representation between them as you choose. Determine the pros and cons of each guild and where you are most comfortable. If you are able to join guild missions at the time set by the guild then you will receive valuable rewards including coin, equipment and guild commendations that may be used to purchase beneficial items from the Guild commendation trader or the Guild Trader.