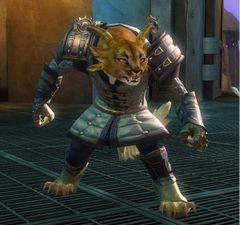 Samona Ironclaw is an engineer and Tribune Torga Desertgrave's contact in the Iron Legion, described by Torga as being sharp, but chatty, likely due to the fact she claims to think out loud, as she needs noise while she works. She is encountered during personal storyline mission Iron Grip of the Legion if the player chose to protect the Iron Legion siege engine, and at the end of the quest, she will join the player's warband. Outside of the personal story, she appears in Hero's Canton.

Bug:
Samona Ironclaw may not appear in any more personal story missions after you recruit her for your warband.
Retrieved from "https://wiki.guildwars2.com/index.php?title=Samona_Ironclaw&oldid=1921043"
Categories: