From Guild Wars 2 Wiki
Jump to navigationJump to search
Spoiler alert: The following text contains spoilers relating to Edge of Destiny, Ghosts of Ascalon, the personal story, and The Icebrood Saga. 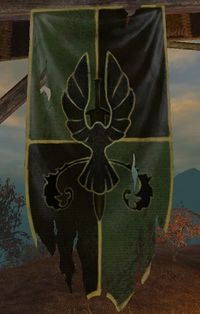 Banner used by the Ebon Vanguard.

Many of the Vanguard members followed the prince through the Shiverpeak Mountains with other likeminded Ascalonians in order to seek shelter from the charr in Kryta. After Rurik's demise in a Stone Summit ambush in 1072 AE, Captain Ander Greywind continued to lead the refugees into Kryta and would protect the Ascalon Settlement during the later Krytan Civil War.

Meanwhile, the Ebon Vanguard, an off-shoot of the Ascalon Vanguard, chose to remain behind in Ascalon to support Adelbern. Led by Captain Samantha Langmar, they ventured deep behind charr lines to take the battle to their enemies. Many of the human slaves whom the Ebon Vanguard had rescued from the charr, including Gwen Thackeray, joined them and swelled their ranks over the years.

When the Elder Dragon Primordus's destroyer minions began appearing in the Depths of Tyria in 1078 AE, the dwarf Ogden Stonehealer traveled north in the company of various heroes to find allies to fight back the invading menace. At the Eye of the North, they found Gwen, who had temporary command of the Ebon Vanguard while Captain Langmar was on a mission in the Blood Legion Homelands.

Langmar's return was long overdue, however, and a worried Gwen led a small force into charr territory, freeing the rebellious charr Pyre Fierceshot from Flame Legion captivity and kickstarting the charr rebellion in the process. During this time she learned to tolerate and trust Pyre and his warband and came to see that not all charr were enemies to be slain, although she made it clear to him that she did not fear but hate his kind. This amused the impressed Pyre, who would form a friendship with the belligerent human.

Later, Gwen and the Vanguard aided the dwarves against the destroyers, and they were present for the defeat of the Great Destroyer, Primordus's champion.

Gwen attained command of the Ebon Vanguard during the Krytan Civil War when Captain Langmar traveled to Kryta with the Ebon Falcons to come to the aid of Kryta at the behest of the Shining Blade Master Exemplar Evennia. When the White Mantle marched on Lion's Arch to crush the Shining Blade who were supporting Princess Salma's campaign to claim the Krytan throne, Langmar escorted the necromancer Livia, and the asura pair Blimm and Zinn into the city, but lost her life to the mursaat near the Ascalon Settlement in 1079 AE.

Gwen, now in command of the Ebon Vanguard, led a search for Captain Langmar and the Ebon Falcon Lieutenant Kieran Thackeray, who had also gone missing in the fighting, and eventually learned of Langmar's death and rescued Keiran. The two grew closer, and Gwen eventually accepted Keiran's wedding proposal after their reunion. They were wed in the presence of long-time allies and friends, including members of the Vanguard, at Olafstead with the norn Olaf Olafson acting as the vow master to make the pair's union official.

In 1080 AE, Adelbern recalled the Ebon Vanguard and asked them to fortify Ebonhawke in an attempt to solidify Ascalon City's supply lines and establish a last-ditch holdout position against the encroaching charr.[1]

By the time the Vanguard came to Ebonhawke, Gwen was in charge of the unit. She forged the stronghold into what it is today, and she led its defense during its darkest times, right after the Foefire. Under her guidance the walls of Ebonhawke stood strong—so strong that they remain unbroken to this day. The charr came to fear the relentless Gwen who cut them down, naming her the Goremonger.

The charr High Legions besieged Ebonhawke after the Foefire, which Adelbern had unleashed throughout the region when Ascalon City had fallen to the charr, left Ebonhawke as the sole surviving human-occupied settlement in Ascalon. However, the Vanguard managed to hold the stronghold because of its sturdy walls and because the charr were facing other threats such as Ascalonian ghosts as well as the rogue Flame Legion on other fronts at the same time.

In 1320 AE, Queen Jennah and her bodyguard Countess Anise visited Ebonhawke as part of the Krytan delegation. Their mission was to repair the asura gate there and link the stronghold with the Krytan capital of Divinity's Reach in order to help supply the besieged stronghold and promote unity between Ascalonians and Krytans.

During that time, the Elder Dragon Kralkatorrik rose and created the far-reaching Dragonbrand, corrupting several inhabitants in the process while he flew south to confront his rebelling scion Glint. The Branded horde, including ogres led by the corrupted Chief Kronon, were compelled to march to Ebonhawke and assaulted both the charr besiegers and the Vanguard alike.

Prior to the siege, the Vanguard had managed to capture a few charr such as Flinteye Blazestone and kept them locked in the underground prison with their worst prisoners.[2] As the Ebon Vanguard and the Queen's Seraph forces were losing, Logan Thackeray arrived in the city via a portal he had created with help from Snaff's device. He went to the underground prison where Flinteye was being held and tried to recruit the charr prisoners within to the fight. Initially, the charr refused Logan's offer until he showed Flinteye the Blood Legion emblem which his friend Rytlock Brimstone had earlier given Logan as proof of who he was and his personal alliance with the charr.

Following Flinteye's lead, the charr bitterly agreed to help and joined the Ebon Vanguard in fighting off the Branded forces. The joint defense kept Jennah and Anise safe and gave the two mesmers enough time to conjure an illusion that fooled the Branded into thinking that everyone in the city had been Branded. The pair then cast an illusion of Kralkatorrik flying south, compelling the Branded to follow the Elder Dragon south and abandon the siege of the stronghold.

While the High Legions continued besieging Ebonhawke, news of Kralkatorrik's rise and the human and charr collaboration during the Branded siege spread and led to the forming of pro-peace factions among both races. However, neither faction received enough support to proceed with their aspirations despite the looming Elder Dragon threat. The political situation prompted Queen Jennah, Ash Legion Imperator Malice Swordshadow and General Almorra Soulkeeper of the Vigil to quietly plan the retrieval of the lost Claw of the Khan-Ur from the ghost-infested Ascalonian Catacombs in order to present such a valued artifact to politicians on both sides and secure support from them.

In 1324 AE, Almorra sent a multiracial adventuring guild comprising of the Ebonhawke-born humans Dougal Keane and Riona Grady, the charr Ember Doomforge, the norn Gullik Oddsson and the sylvari Killeen to retrieve the Claw. The guild stopped at Ebonhawke on their way north to Ascalon City ruins. Forced to keep their mission a secret so it could not be sabotaged by anti-peace parties, they put Ember in chains and pretended her to be their prisoner.

The Vanguard remained oblivious to the guild's plans at first but were eventually alerted to them when, unbeknownst to the rest of the guild, Riona was against peace between the two races and clandestinely revealed their mission to the Vanguard. However, thanks to the assistance of the local asura Kranxx who joined the party along the way, the guild was able to evade capture and flee through the sewers although they were forced to kill a Vanguard unit chasing after them below the stronghold.

Despite losing members during the adventure, the guild ultimately succeeded in securing the Claw of the Khan-Ur and handed it over to Almorra, setting the stage for the armistice between humans and charr and allowing talks for the Ebonhawke Treaty, named after the stronghold, to begin.

In 1332 AE, news began spreading of the actions of the rogue Blood Legion Imperator Bangar Ruinbringer and his breakway Dominion faction who were spreading violence and propaganda against non-charr races while promoting charr supremacy. The Vanguard grew worried about Bangar's aspirations in his effort to undermine the Ebonhawke Treaty.[3]

Several months after the awakening of the Elder Dragon Jormag in 1333 AE and the fall of the Dominion in the war against the United Legions in Drizzlewood Coast, another Elder Dragon known as Primordus began to stir. Primordus's forces, the destroyers, started attacking settlements around Tyria. The Ebon Vanguard started marshaling towards the affected places soon after while sending a tactician named Jonna to the Eye of the North, a place they had previously used to call one of their outposts,[4] to join the allied talks there and support the Pact Commander's efforts against the rising threat of the two clashing Elder Dragons.

Some time later, Vanguard scouts noticed increased destroyer activity around Ebonhawke. Fearing an imminent invasion, Captain Thaddeus Soren sent a letter to the Pact Commander and asked them to assist the stronghold's strained forces against the Fire Dragon's encroaching horde. The Commander sent word to their allies to hurry to Ebonhawke, managing to secure support from Queen Jennah's delegate Kasmeer Meade as well as Blood Legion Imperator Crecia Stoneglow whose forces were close by in the Fields of Ruin clearing the remaining Renegades. Although Crecia was eager to offer her assistance, Kasmeer worried that a charr imperator leading a heavily armed contingent into the stronghold would only increase tension between humans and charr. The Commander sent Kasmeer to Ebonhawke ahead of Crecia so she could soften the ground for the Blood imperator's impending arrival.[5]

By the time the Commander had reached Ebonhawke, the stronghold was already under attack by the destroyers. While awaiting reinforcements from other allied factions, Crecia, Kasmeer and the Commander rallied the locals, armed soldiers and civilians alike and even inspired Separatist sympathizers to set aside their suspicions and fight alongside the charr against a common enemy. The Postern Gate fell to destroyers, however, forcing the defenders to regroup deeper in the stronghold to defend the citizens there while the arrival of the allied reinforcements helped even the odds.

The Destroyer of the Third Fortress, a champion leading the invading horde, appeared soon after at the Hawke Heart in an effort to crush the survivors. The Commander led the defenders against the champion and eventually defeated it after a fierce struggle. With their leader fallen, the remaining destroyers retreated from the battlefield.

Although the Ebon Vanguard had initially been suspicious of Crecia because she had once been the warmongering Bangar's second-in-command, Crecia's actions in defending Ebonhawke as the new imperator had convinced the people there that her insurrection against Bangar's Dominion in Drizzlewood had been only the first step in normalizing relations between Ebonhawke and the Blood Legion and that she would continue honoring the terms of the Ebonhawke Treaty. Crecia, however, was unsure if the Ebon Vanguard would come to the aid of the Black Citadel if the charr had fallen under attack instead but she hoped that her actions would ensure further collaboration between the two races in the future.[3]