This article is about the area. For the area as it appears during Halloween, see Village of Smokestead/Halloween. 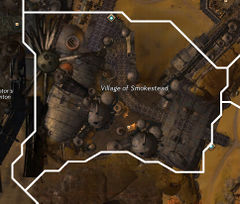 Map of Village of Smokestead

Location within Plains of Ashford

Smokestead lies outside the Black Citadel on land we took back from the humans. It's our base of operations for further expansion into this region.

The Village of Smokestead is a small charr settlement that borders the Black Citadel. It is used for the citadel's defense against threats in the Plains of Ashford, such as Ascalonian ghosts and the Flame Legion.

Tavern on the Grey

Prevent a brawl between the three legions (4)

Engineer: Whiskers, I need a flash of inspiration.

Engineer: Two tons of ore, one each of distilled coal and limestone.

Engineer: It's gonna take a blast furnace bigger even than the one we've got, my friend.

Engineer: What if we blew air through the molten iron, Whiskers? What do you think of that idea?