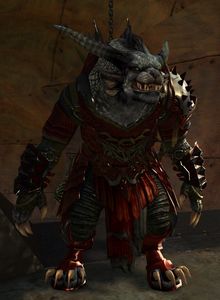 At the end of the day, I don’t care whose banner I serve under as long as I’m the one giving the orders.

Rage Steeltongue is an overeager Blood Legion charr. He planned to usurp Legionnaire Urvan Steelbane as the latter was reforming the warband destroyed by Duke Barradin's assault on Village of Smokestead. However, after Urvan was overthrown, Rage turned to the Flame Legion, promising assistance in weakening the Black Citadel's defenses in return for a ranking position.