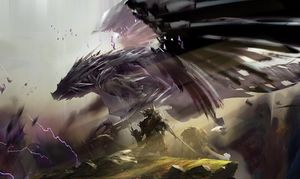 Almorra's Massacre refers to the death of Almorra Soulkeeper's warband in 1320 AE during the creation of the Dragonbrand, which subsequently led to the founding of the Vigil.

Ordered by her centurion who was in charge of interdicting enemy supplies in eastern Ascalon, Legionnaire Almorra Soulkeeper of the Blood Legion and her Soul warband were on patrol in the Lowland Burns when the Elder Crystal Dragon Kralkatorrik stirred. According to Almorra's recounting, she felt it before she heard the dragon, as a strange feeling that reached into her bones and made her fur stand on end. Harthog Soulslasher, her second-in-command, saw Kralkatorrik first as it came over the edge of the mountains behind them. The others turned to see what could terrify Harthog, whom Almorra considers the bravest charr she had ever known, while she reached out to and grabbed her friend by the shoulders to shake the fear from him. As she did, Harthog began to transform into a Branded.

His eyes began to glow an unearthly purple, and his muzzle shrank back into his face, becoming like the soft but toothy maw of a giant leech. His fur became transparent as his arms transformed into flailing, shard-like claws. The skin peeled back from his face, and his lips and nose and eyelids shriveled up and fell away. And then he turned into living glass, crystallizing in an instant before Soulkeeper's eyes into his twisted form. And at her back, she could feel a pressure as Kralkatorrik passed overhead and created the Dragonbrand.

As the Dragonbrand formed, the screams from the rest of the Soul warband tore at Almorra's ears. She drew her blade just before the creature that had been Soulslasher attacked, driven mad by corruption and intent to devour her alive. Despite her proximity to her warband, she was able to escape becoming Branded. Almorra had to shatter Harthog into pieces to put him down, and when she turned she saw the rest of her warband trying to kill each other, each twisted in a unique and horrible way. Soulkeeper waited for her warsiblings to tear each other apart, before stepping in and dispatching the survivors. When she was done, she looked before and behind herself and saw that every part of the land that had passed beneath the dragon had been twisted in this same way. The grass shattered under her feet as she walked on it, grinding it into sand.

Soulkeeper fell into depression with her warband's death and she became a gladium, refusing anyone attempting to aid her. Eventually, with the help of a few unlikely allies, she came to herself and knew what had to be done and formed the Vigil.