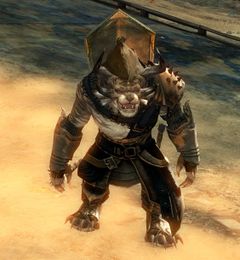 Dinky is a charr that is originally part of a charr player character's warband. He takes part in the battle against Duke Barradin's ghostly forces in the Village of Smokestead. If the player does not choose him as their sparring partner in their biography, he dies during the battle. If he is the player's sparring partner, he survives and helps them along the rest of their personal story.

He used to be the smallest cub in the fahrar and fought harder to compensate. He is also described as "not very smart", but is a good friend. He is a guardian, and gets picked on often because of that.

In 1333 AE, Dinky assisted the United Legions in their war against the rogue Imperator Bangar Ruinbringer's Dominion forces in Drizzlewood Coast. While there, he had a chance meeting with the Legionnaire who had become known as the Pact Commander.

Dinky explained that, unlike many charr, he had never viewed Aurene as a threat because he trusted in the former Legionnaire's judgement, and he even considered the Elder Dragon an honorary member of the warband.

Dinky also revealed that he had done his best to be worthy of his mantle of Legionnaire in the warband. Despite recruiting more members and having adventures with them, he was unable to prevent some warbandmates from either dying or defecting to the Dominion. The defectors included potential warbandmates Cerosi Breaksteel, Elexus Shredskin, Luccia Wildeye, and Yahuk Fellstrike. Dinky vividly remembered the deaths of Howl and the original warband, so he swore not to lose one more warbandmate to Bangar.

You've been busy, huh? Elder Dragons, a god, an undead lich... Heard all the stories!

How's the warband? (same as below)

Honestly? Thought I'd come into my own as a legionnaire after you left. Grew the warband, went on adventures, but... We lost a lot of good people. Dead, or worse. Defected.

What do you think of Aurene? (same as above)