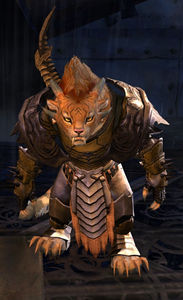 Reeva is a charr engineer who is an original member of the Legionnaire's warband. She takes part in the battle against Duke Barradin's ghostly forces in the Village of Smokestead.

Reeva is described as a charr with a strong sense of humor who seeks to have fun in life and lets nothing get her down. She also implies, through her own dialogue, that she loves to drink and dance. In addition, she seems to have an affection for sweet foods (and/or baking in general) judging by dialogue trees in The Tribune's Call.

When not doing missions with the warband, Reeva can be found in the lounge/bar area on the first floor in the building to the left of the entrance of Hero's Canton.

Reeva did not know her sire well. What she claimed to remember were her sire calling her "Kitten" and how he would notch his mace for every kill and laugh at each one.[1] As Reeva grew up in the fahrar, she joined a warband and befriended fellow young charr Clawspur, Dinky, Euryale, Howl, Maverick, and another cub who would one day become a renowned leader.

In 1333 AE, Reeva assisted the United Legions in their war against the rogue Imperator Bangar Ruinbringer's Dominion forces in Drizzlewood Coast. While there, she had a chance meeting with the Legionnaire who had become known as the Pact Commander.

Reeva explained that, unlike many charr, she had never viewed Aurene as a threat because she trusted in the former Legionnaire's judgement, and she even considered the Elder Dragon an honorary member of the warband.

Reeva also revealed that she had done her best to be worthy of her mantle of Legionnaire in the warband. Despite recruiting more members and having adventures with them, she was unable to prevent some warbandmates from either dying or defecting to the Dominion. The defectors included potential warbandmates Cerosi Breaksteel, Elexus Shredskin, Luccia Wildeye, and Yahuk Fellstrike. Reeva vividly remembered the deaths of Howl and the original warband, so she swore not to lose one more warbandmate to Bangar.

How the warband? (Same as below.)

Maybe I should change my name to "Reeva the Cleava." Nah, that's awful.
If you think I can fight, wait till you see me dance.
Ugh. A burning harpy nest smells just like a chicken frying in sewage.
That's not ammo! That's brownies I made to cheer you up in case the Ghostbore Musket didn't work. I guess they're a bit overcooked, huh...
Gahn's kinda cute...for a big, lumbering, humorless goon. Wonder if he's single.