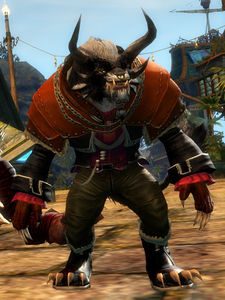 The same principles apply to both trade and combat! A stout heart and sufficient supplies will always carry the day! I love the smell of commerce in the morning!

Captain Evon Gnashblade is the owner and proprietor of the Black Lion Trading Company in Lion's Arch. Ever ambitious and cunning, he uses his Ash Legion training with the intention to dominate the marketing battlefield and deliver the finest and most unique items to his customers.

As a soldier of the High Legions, Evon Gnashblade first came to Lion's Arch at the age of 20 as part of an Ash Legion operation to extort the people of the city, under the banner of the Black Lion Trading Company. He was by all accounts a dependable soldier who never disobeyed orders—until that day. When he raised concerns with his legionnaire, Aria Gnashfang, believing that attempting to intimidate the pirates of Lion's Arch would not be fruitful, the disagreement led to a fight during which Aria attempted to kill Evon. However, Evon was faster and killed the legionnaire instead, becoming the new head of the operation. The next day, the Black Lion Trading Company was established in earnest as a legitimate business.

Under Evon's leadership, the company focused on dominating the marketing battlefield and delivering the finest and most unique items to its customers. Due to Evon's personal preferences, gems became the desired currency for the company's most valued items.[1] As the company grew, Evon hired the sylvari Sareb as his aide-de-camp, and gradually extended his reach throughout Central Tyria. Sareb has suggested that Evon left his legion to found the company as an independent merchant, but it is unknown if Evon truly cut ties with the Ash Legion for good. 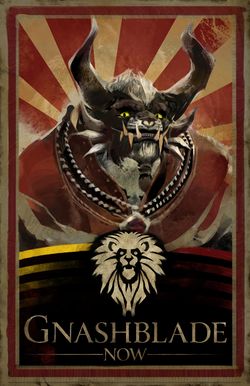 During elections to appoint a new Captain's Council member after the assassination of Captain Theo Ashford by Captain Mai Trin in 1326 AE, Evon purchased a vessel which made him eligible as a candidate. He attempted to secure a trade agreement with the Master of Peace and the Zephyr Sanctum to gain a seat in the council, and went on a campaign to discredit his rival candidate Ellen Kiel while simultaneously receiving as much criticism from Ellen's supporters in return.[2][3] Despite his efforts, Evon narrowly lost out to Ellen who was elected instead. He advocated for Lion's Arch investing in better defenses in case Scarlet Briar, who had been menacing Tyria throughout the year, decided to attack the city, but his warnings fell on deaf ears.

When Scarlet's Alliance invaded Lion's Arch, Evon had adventurers help him escort dolyaks carrying valuable goods through an asura gate. To protect his investments, he shut down the gate from the other side, trapping citizens in the warzone. After the destruction of Lion's Arch and its subsequent occupation by Scarlet's forces, Evon settled in a refugee camp in the northern hills of Gendarran Fields where the Vigil was protecting and providing for survivors as well as planning a counterattack.

Under the orders of Captain Kiel, Evon was conscripted into the Lionguard under General Emergency Statute 14 and forced, along with all other Black Lion Trading Company merchants, to act as a deputy quartermaster for the Lionguard upon pain of death. He was then approached by a golem named Heal-o-Tron who requested and begged for a combat chassis and an energy amplifier in order to aid in the assault against Scarlet. After some thought Evon helped install the combat chassis on the golem, thus allowing it to participate in the retaking of Lion's Arch alongside other adventurers. However, Evon had taken note of the golem's ID number and discreetly researched it, tracing it back to the Black Lion's rival, the Consortium, and the incidents involving the settlers at Southsun Cove. These findings made Evon realize the origins of the newly named Hero-Tron and the means to use the golem to his advantage.

After Scarlet Briar had been slain and Lion's Arch had been reclaimed, Evon returned to the ruined city along with other survivors. He provided the concrete for the city's new look as it was rebuilt with new architecture and better defenses. He blackmailed Hero-Tron to act as his spy in the Captain's Council by threatening to expose the golem's history with the Consortium if it did not obey his commands. Using his amassed funds, Evon decided to put all of Tyria's experts in armor repair on salary, allowing Tyrians to repair their armor at no cost from that point onward.[4]

During the rebuilding of Lion's Arch, Evon was reportedly seen in two locations at once, which made some locals like Wild-Eye Miller spread conspiracy theories about Evon having a twin brother named Tarvan with whom he communicated telepathically to control the city. However, unbeknownst to most, the culprit was actually a charr lookalike who had taken to posing as Evon, likely in order to get free drinks in the city.

Evon used the profits he had made from his temporary job as a Lionguard quartermaster to build a better vault for his goods and turned it into his new headquarters. When he was not making investments, he took frequent walks around the rebuilt Lion's Arch and observed local power players such as the Consortium and the Order of Whispers gaining ground in the city. Frustrated by losing his seat in the Captain's Council to Ellen and not having a statue built in his image for all the work he had done for Lion's Arch, Evon used his remaining campaign posters from the candidate trials to unceremoniously decorate the trash can in his office. Believing that the Lionguard would not be able to protect his investments well enough, he considered hiring mercenaries to watch over his shipments.

As Central Tyria made contact with the Free City of Amnoon following a sudden influx of Elonian refugees in Lion's Arch in 1330 AE, Evon sent representatives of the Black Lion Trading Company to Amnoon. Along with their rival Consortium representatives, they began negotiating with the business tycoon Zalambur for access to the Elonian customer network. Zalambur considered their terms in exchange for them providing him with Tyrian goods that he could not find locally.[5] To boost his image, Evon even had an action figure made in his image during this time.

The Captain's Council of Lion's Arch and Queen Jennah of Kryta collaborated in bringing back the Festival of the Four Winds to provide supplies and funds for the displaced Zephyrites who had once aided Lion's Arch in its time of need. Learning of the council's plans through his golem spy, Evon pulled the supplies together and accompanied Ellen Kiel to the Labyrinthine Cliffs where they welcomed visitors and also talked with one another. He refused to take part in the festivities himself, instead offering sound economic advice to Ellen about how to handle the trade renegotiations with the Zephyrites to make the percentage better for Lion's Arch.

During their conversations Ellen revealed that she had not forced Evon to aid the Lionguard out of spite during the invasion of Lion's Arch but to keep the Black Lion Trading Company in business after the Captain's Council had considered breaking up the company because of Evon's actions with the asura gate. Surprised, Evon questioned whether Ellen saving his company had been an altruistic act or for more selfish reasons, but he was eventually satisfied by her answering that the financial well-being of Lion's Arch was tied to how well Evon's company was faring. Evon let Ellen know in return that he knew about her affair with Zalambur. Although he refused to let her know how he had learned of the affair, he voiced his concerns over whether the relationship would affect their business arrangements, only to hear Ellen reassure him that everything would proceed as usual.[6]

1Players can only access his dialogue at this location.

From Escape from Lion's Arch until May 24 2014 Evon offered the standard merchant items along with the following:

Yeah? What do you want?
With The Dreamer III: The Lover active

What are your goals with your trading company?

I intend to dominate the marketing battlefield! And, of course, deliver the finest and most unique items to my customers. (Adds Evon's Dreams of Economic Dominance to your collection)

I see. Good luck with that!

Never mind. I can see you're busy.
With a Mini Angry Chest in inventory or unlocked in the wardrobe
How are you liking your angry chest purchase? They are a bit aggressive. I had to fire Krepet, he was responsible for this mess.

Why don't you open them?

So much danger is involved with trying to open these things that I'm practically giving them away free.

Do you know where Krepet is now?

Last I heard he accepted a position with Brill Alliance Labs.

Thanks for your time.

Greet
So nice to see you.
I could make your life easier.
It's a good day.

Bug:
If players are crafting The Dreamer, but have not completed the entire quest chain and obtained the Mini Red Spark, Evon Gnashblade will not prompt the relevant dialogue for the legendary collection.