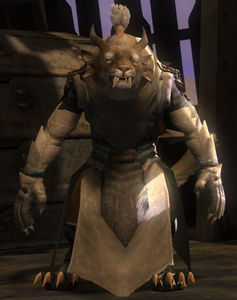 Aurelia Stonegazer is a member of the Iron Legion found at Temperus Point.

Section-stub. This key section of the article is incomplete. You can help the Guild Wars 2 Wiki by expanding it.
Reason: According to German wiki's page for her, she has event dialogue

You here to earn some scars? No better place.

During Kill the veteran lava shaman

The Flame Legion have a camp nearby and we need recruits to take the fight to them!

Head southwest and destroy the Flame Legion shaman who has been causing all this trouble.

During Destroy the effigy before it reaches the Victory Cenotaph

There's an effigy, and it's headed straight for the statue of Pyre Fierceshot. Who knows how much damage that thing can do. Get over there and stop it.

Just point me at it!

Move it! Move it! Time is of the essence!

Now's not a good time for me.