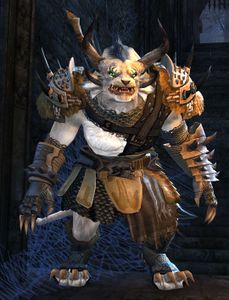 Howl the Brazen is the second-in-command of the charr Legionnaire's warband, or original Legionnaire for Ash Legion charr. He is killed along with most of the warband when Duke Barradin assaults Smokestead. However, Howl makes an unexpected return later, forcing the Legionnaire to come face to face with the past.

Howl the Brazen was a member of the future Legionnaire's warband, either as the original Legionnaire in the Ash Legion or the warband's second-in-command lieutenant for Blood Legion and Iron Legion charr. Howl received an amulet from an asuran necromancer named Rissa, believing it to be a good luck charm, and intended to give it to his warbandmate Dinky later.

When Duke Barradin sent an army of Ascalonian ghosts to assault the Smokestead in 1325 AE, the warband was ordered to assist Tribune Rytlock Brimstone who was taking the fight to Barradin to temporarily destroy the ghostly duke in order to weaken his army. Although Barradin was defeated after a fierce clash, his last act was to make the vaults collapse on the assaulting charr. Howl and most of the warband perished either to ghosts or in the resulting cave-in. While Howl's body had not initially been not found among the rubble, it was eventually dug up and placed in a grave in Victor's Presidium.

Learning that Rissa had been distributing strange amulets which attracted undead and that Howl had been one of the recipients, the three Orders of Tyria contacted the High Legions to get a permission to unearth Howl's corpse to study the amulet and find out what they were up against. Rytlock sent the Legionnaire, who had been promoted to Centurion, to assist the Orders given the involvement of the Centurion's former warbandmate. However, the group found neither the body nor the amulet, as, much to their surprise, the grave was empty.

The Centurion continued assisting the Orders as they retraced the trails of the amulets. They learned that Rissa had made the amulets out of a Dragon Crystal infused with the Elder Dragon Zhaitan's corrupting magic that turned all its wearers into Risen. The search ultimately led the charr to the necromancer herself who was also corrupted. As the Centurion's group confronted Rissa, the necromancer unleashed her Risen minions, among whom was the turned Howl. Realizing that the warbandmate was beyond saving, the Centurion ultimately ended Howl's cursed existence by killing him before taking down Rissa as well to prevent Zhaitan's corruption from spreading.

Lore discrepancy:
In early mission discussions with NPCs, it is said that Howl's body was never found in the rubble when the crypt collapsed in Fury of the Dead. But in Graveyard Ornaments, the player goes to his grave and find the body missing, the player character saying they saw the body.
Retrieved from "https://wiki.guildwars2.com/index.php?title=Howl_the_Brazen&oldid=2301998"
Categories: