From Guild Wars 2 Wiki
Jump to navigationJump to search
Stub. Key elements of this npc article are incomplete. You can help the Guild Wars 2 Wiki by expanding it.
Reason: Add screenshot from Drizzlewood Coast.
Spoiler alert: The following text contains spoilers relating to the personal story and The Icebrood Saga. 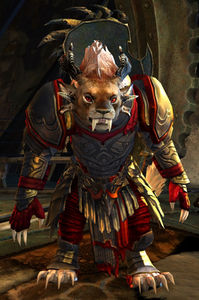 My warband wasn't the easiest bunch to get along with in the best of times. I'm grateful for a chance to serve with a better crew.

Elexus Shredskin is a charr that joins the Legionnaire's warband if Blood Legion was chosen during character creation. The Legionnaire encounters Elexus and Flame Recruiter Prathar arguing and, after refusing to desert the Blood Legion for the Flame Legion, helps her kill the Flame Legion soldiers and her traitorous former warband. Elexus, now alone, asks to join the Legionnaire's warband in hopes that she does not become a gladium for the rest of her life. After recruitment, Elexus can be found in the lounge area on the first floor in the building to the left of the entrance of Hero's Canton.

In the fahrar, Elexus met Rage Steeltongue, a gladium whom she considered the biggest bully in the fahrar and figured that if he got into a warband, they would kill him.[2] Elexus's warband was considered by her to be difficult to get along with even at the best of times. At some point, Elexus met Laris, a Blood Legion quaestor whom she would later describe as "the best quartermaster in the Legions".[3]

Chapter 1: Getting the Band Back Together[edit]

In 1325 AE, after the attack on Smokestead by Ascalonian ghosts, Elexus's warband, discontented with the deaths of half of their warband and blaming the tribunes of the Blood Legion, was approached by Flame Legion recruiters, led by Recruiter Prathar, and all of them except for Elexus willingly defected to the Flame Legion. Around this time, Laris and his warband were killed when they refused to join the Flame Legion.

While Elexus argued with a Flame Legion recruiter, the Hero of Smokestead, the Blood Legion soldier who had driven off the Ascalonian ghosts at Smokestead, appeared alongside their surviving warbandmate on the scene as the pair had been ordered by their legionnaire, Urvan Steelbane, to protect some supplies. They witnessed Elexus arguing with the recruiter and drove off the Flame Legion with Elexus's help. Afterwards, Elexus asked to join the Hero's warband out of fear that she would become a gladium. The pair accepted her offer, warning her about about Urvan's temper and the fact that he would be furious about them losing the supplies.[3]

Soon after, Elexus witnessed Urvan being confronted by the Hero of Smokestead and then observed them fight in the Bane, an arena, with the current champion, several soldiers and a large devourer, alongside Urvan himself. Depending on the choice made by the Hero, Urvan either was killed or limped away. After this, Tribune Rytlock Brimstone of the Blood Legion suggested that the Hero of Smokestead, now the legionnaire of the Steel Warband, increase the warband's ranks by recruiting either Soure Doomsday, an elementalist whom the Flame Legion were also attempting to recruit, or Fyon the Wraith, an old charr who had his warband killed by Ascalonian ghosts.

After recruiting one of the two charr, Elexus and the legionnaire's Steel Warband returned to the Black Citadel, where Rytlock explained that Rage Steeltongue, recruited to the Steel Warband by Urvan, had defected to the Flame Legion and needed to be eliminated. When asked if she knew Steeltongue, Elexus explained that she had known him as the biggest bully in the fahrar and that she thought he would be killed by his warband one day.[2]

Upon the warband arriving at Smokestead to look for traces of Rage, Elexus noted to the legionnaire that "your friend [Rage] is kind of a terror" to which the legionnaire replied that he was not a friend, but a target. The group then found that Rage had driven cattle towards the Black Citadel and armed them with explosives, though the cattle were driven away from the citadel before they exploded. Elexus then assisted the warband in battling fire creatures that Rage had encouraged the Flame Legion to summon.

Elexus then assisted the rest of the warband in putting Rage down. However, after Rage's death, the Flame Legion attacked the citadel, with Elexus serving as a sniper to fend them off during the battle. After the destruction of the Flame Legion forces, Elexus declared that their rear guard was down.[4] After the battle, she complimented the legionnaire.

Chapter 2: Sins of the Father[edit]

Section-stub. This key section of the article is incomplete. You can help the Guild Wars 2 Wiki by expanding it.
Reason: Expand biography with events from Chapter 2.

In the following weeks, Elexus assisted the legionnaire in finding their sire or the sire's treasure and offered to guard him.

Section-stub. This key section of the article is incomplete. You can help the Guild Wars 2 Wiki by expanding it.
Reason: Expand biography with events from Chapter 3.

The legionnaire was promoted to the rank of centurion after dealing with the mission involving their sire.[5] Elexus assisted the warband in researching what had happened to the centurion's old warbandmate Howl the Brazen who had perished during the Battle of Smokestead. She helped the warband kill Harriden the Cursed, a Risen minion of the Elder Dragon Zhaitan. During this mission, she noted that she would have no issues with joining the Vigil as their commanding officer, General Almorra Soulkeeper, was female.

An unknown amount of time later, two members of the warband were killed by the Branded while attempting to evacuate a Sentinel patrol near the Wreckage of Day's Labor. Elexus argued with the warband's current leader, the centurion's sparring partner, about the death of the warbandmates. She had grown disillusioned with the centurion whom the Pact had "poached" to fight a war against the Elder Dragons.

Later, Elexus was called to the Blood Keep by Imperator Bangar Ruinbringer and Tribune Crecia Stoneglow to suggest that she be promoted to legionnaire to found her own warband. Bangar asked Elexus about the centurion, and she obediently answered the imperator's inquiries.

She then met Vishen Steelshot, a member of another warband named Steel and a proficient sniper at Sniper's Square while teaching cubs how to snipe. The two female charr competed against one another at the firing range, and they eventually bonded over their shared interest in fine meat.[1]

In 1333 AE, Elexus joined Bangar's breakaway Dominion forces, scoping out Drizzlewood Coast for good places to station sharpshooters alongside Vishen and the rest of the Dominion's Steel Warband. She noted in her journal that the centurion was with the rival United Legions forces, and she hoped not to meet the old boss in battle. Elexus was ultimately killed by the United Legions and adventurers while defending one of the supply caches vital to Dominion operations in the region.[1]

No Quarter: Cache Hunter — Defeat all 10 cache keepers in the Drizzlewood Coast. (10