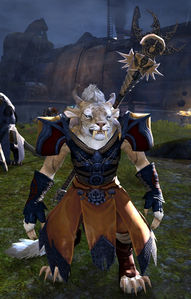 Euryale is a charr that is originally part of a charr player character's warband. She takes part in the battle against Duke Barradin's ghostly forces in the Village of Smokestead. If the player does not choose her as their sparring partner in their biography, she dies during the battle. If she is the player's sparring partner, she survives and helps them along the rest of their personal story and be in the player's home instance.

She is an elementalist, and is described as loyal and honest, although she's also stubborn, bad-tempered and protective.

I'm not good with people.
I don't know wildlife, but if it's got a throat, eyes, or a belly, I know where to stab.
...and I said, "I AM smiling"
I tried skritt rations once. Never again.