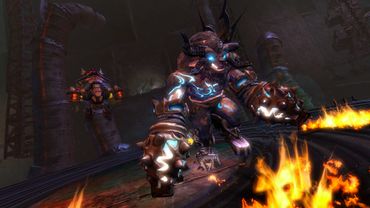 Heads of a Molten Facility.

The Molten Alliance is the unexpected consolidation of Flame Legion and dredge forces by Scarlet Briar to combine the magic of the charr with the technology of the dredge. They joined Scarlet's Alliance and assaulted Lion's Arch in 1326 AE before being driven off. The Molten Alliance's current status as well as the identities of its leaders are unknown.[1] However, achievements relating to the Molten Boss Fractal imply that their leaders were the Molten Firestorm and Molten Berserker found in a Molten Alliance weapon facility.[2]

According to a dredge prisoner, a "smooth talker" from "the city" approached the dredge with an offer from the Flame Legion to form an alliance; this person turned out to be a sylvari calling herself Scarlet Briar. The moletariate pushed their comrades into the alliance, expecting to use the charr's fire magic to enhance their weapons technology, i.e. their greed for more power overwhelmed the dredge's general hatred of oppressors such as the Flame Legion. In contrast, the Flame Legion had always planned to make use of dredge technology to seize more territory and eventually re-enslave the dredge.[3] Scarlet benefited from the alliance as they provided her with the means to construct a sonic magical device and use it for probing for ley lines underneath Tyria, leading her to eventually discover a notable ley line hub underneath Lion's Arch.[4]

The shamans used the female charr of the Flame Legion to expend their powers to infuse the weapons, which led to many charr women losing their lives in the rituals. One member of the legion, Efram Greetsglory, was outspoken in his resistance to the Molten Alliance, but he was ignored.[5] During this time, concerned female dredge wrote strongly worded missives to their commissars where they protested the Flame Legion's treatment of female charr and warned against any attempts to adopt similar antifemale policies among the dredge.

In early 1326 AE, the Molten Alliance established itself in several facilities beneath the Wayfarer Foothills and Diessa Plateau, without being detected by the Orders due to their attention on the Elder Dragons.[6] The Alliance attacked several settlements, taking prisoners and putting them to work in Azurite Crystal mines, as well as testing new weaponry on them.

The displaced refugees fled to Hoelbrak, the Black Citadel, and Lion's Arch, and many were later relocated to Southsun Cove and Cragstead. After liberating Cragstead and the North Nolan Hatchery from the Molten Alliance invaders, the charr gladium Rox, under orders from Rytlock Brimstone, and the young norn hero Braham Eirsson joined forces with the Vigil to stop the Alliance. Many of the facilities were destroyed, and the Molten Alliance were thought defeated.

The Molten Alliance resurfaced later that year, however, attacking locations around Tyria with the help of Aetherblades who were also working for Scarlet Briar. The two factions eventually joined forces with the Toxic Alliance to form Scarlet's Alliance, and they invaded Lion's Arch with a surprise attack, using a special miasma as a biological weapon to clear out defenders. The leaders of the three alliances were not present in Lion's Arch during the invasion, however, and sent their generals to lead the invading armies instead. Scarlet had tasked the faction leaders with making sure that their followers would show up to crush Lion's Arch in overwhelming numbers.[1]

After Tyrians had retaken Lion's Arch and slain Scarlet, the survivors of the three alliances withdrew from the ruined port city and went their separate ways. As the Molten Alliance leaders were not caught due to them being absent from Lion's Arch, their identities and fate remain a mystery.[1] Because of their failures during Scarlet's campaign, the Molten Alliance's charr members were excommunicated from the Flame Legion and would be killed on sight if they ever returned.[verification requested]

In 1333 AE, shamans in Efram Greetsglory's Flame Legion splinter group still lamented the loss of female charr lives and how many bright talents had been sacrificed for power, and viewed that episode as a particularly dark time in the legion's history.[5] 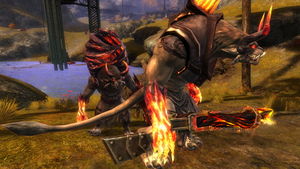