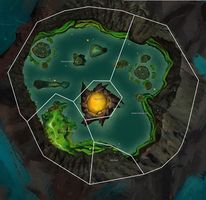 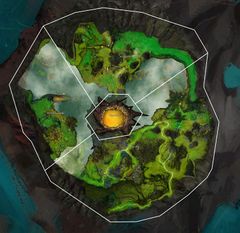 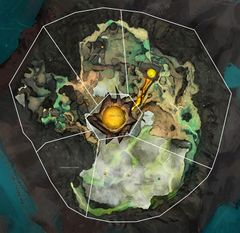 Draconis Mons is a zone in the Ring of Fire Islands. It is a hollow volcanic island on the northwest edge of the island chain, submerged until being forced to the surface by the Elder Dragon Primordus tunnelling underneath.[1] The druids have long watched over this area, having created a nature sanctuary when the island was still beneath the waves; in 1173 AE, the few survivors of the chak attack on Rata Novus fled here, to a colony still in development called Rata Arcanum. Zinn created a device to terraform the area for the benefit of Rata Arcanum, but the druids reacted violently and slaughtered them all. The colony has since been reappropriated by the Inquest.

Perhaps due to Primordus' corrupting presence below, the Sulphuric Water that floods the lower levels of the cavern is acidic and boils fiercely, and will quickly kill the unwary swimmer.

Recently, Balthazar had brought the White Mantle to the area under the guise of Lazarus, then later mercenaries to build a fortress to combat Primordus.

Like most of the Living World Season 3 zones, Draconis Mons is not directly connected to neighboring areas. In order to reach it, one can use one of the following methods:

This map has three floors visible on the world map.

Bug:
The Skimmer can traverse the Boiling Sea with the Skimming the Depths mastery unlocked unharmed up until a certain depth is reached. A message stating 'You are leaving the playable area. Return to the playable area, or you will be killed' will appear if the player goes too deep underwater.