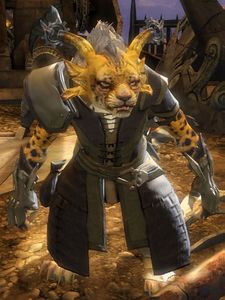 I'm going to keep an eye on you. I may not be able to hear the command to attack, but when the fighting starts, I'll be there.

Luccia Wildeye is an old, deaf gladium from the Iron Legion. She is a weaponsmith and has developed her own sticky shot ammo: buckshot coated with lye that sticks to and burns the target.

Luccia Wildeye served loyally in the Iron Legion with her warband, and years of firing heavy artillery damaged her hearing. As decades passed, her aging warbandmates either died or retired. She eventually became a gladium who was stuck in the Wrecking Yard where she salvaged scrap for the legion.

In 1325 AE, Luccia met with the recently promoted Legionnaire of the Iron Legion who had come to the scrapyard to salvage parts for the Ghostbore Musket. After Luccia saved the Legionnaire from a Flame Legion ambush with her improvised cannon, she was given a choice to join the Legionnaire's warband. It was an offer she gladly accepted as she had grown bored of the scrapyard where she had been been stuck in for months. After joining her new warband, Luccia suggested that the Legionnaire seek out Craze Steelgrinder who could help with testing the Ghostbore musket prototype on the Ascalonian ghosts roaming near the Old Duke's Estate.

Several months to years later on, Luccia offered to the rest of the warband to return to the scrapyard if it would keep them safe. In her diary, she noted that the legionnaire (the former warband legionnaire's surviving warbandmate) was busy keeping up morale and that she rarely heard anything but rumors about the warband's prior leader.

Sometime after, Luccia was approached by Ranoah Grindsteel, a member of Ryland Steelcatcher's Steel Warband. Ranoah told Luccia that she was offering a chance to her to come see her tank before a large celebration. Luccia, noting that she needed a change of scenery in her diary, decided to attend.

After attending Ranoah's celebration, Luccia decided to join her engineer crew and began hearing the Elder Dragon Jormag's whispers, with the Ice Elder Dragon asking specifically about the now-Pact Commander. She had difficulty sleeping due to Jormag's whispers, with this inability to sleep heightened by Imperator Bangar Ruinbringer's soldiers watching her. At some time in the morning, Ranoah came to visit Luccia and talked her through the tank specializations to help her remain calm.

Soon after Drakkar was killed, Luccia and the rest of the Dominion invaded Drizzlewood Coast, taking control of the region and driving out its inhabitants. Luccia was then ordered to guard Dominion supplies in Drizzlewood Coast with her life. She was soon killed while battling a group of adventurers who were assisting the United Legions shortly after Ranoah's death.

Upon killing a foe
Dead so soon?

No Quarter: Cache Hunter — Defeat all 10 cache keepers in the Drizzlewood Coast. (10