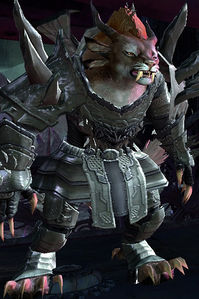 Tribune Kyranith Steelgrip is an Iron Legion tribune, currently in command of charr military operations being conducted within Steeleye Span and its surroundings. Before ordering the construction of the mentioned stronghold, she was forced to relieve Legionnaire Vortarl the Despoiler from duty by killing him, due to the recklessness of his tactics.

Welcome to Steeleye Span. I'm Tribune Steelgrip. If you're here to help us control the Brand, I'm glad to have you in the fight. If you're not here to help, stay out of my way.

What is Steeleye Span?

It's our fort and the only safe bridge across the Brand. We're here to wipe out these Branded creatures and take control of this twisted patch of land.

Tell me about the Brand. (Same as below.)

Tell me about the Brand.

This nightmare was carved into the land by the Elder Dragon Kralkatorrik. Everything here bears his corrupted mark. Have no mercy when you fight a Branded creature because it won't have any with you.

What is Steeleye Span? (Same as above.)

During Defend Steeleye Span's south wall
Do you need something?

What's going on to the south?

Branded creatures are attacking the Span. They keep coming and coming.

Is there any way I can help?

Good, a volunteer. Get out there and kill them all. No mercy.

That's all I needed to know.

During Defend the repair efforts on the south wall
Talk to me after the southern expanse is repaired.

During Protect Tribune Steelgrip
No time to talk. Massacre that dragon's minions.

Section-stub. This key section of the article is incomplete. You can help the Guild Wars 2 Wiki by expanding it.
Reason: Missing dialogue
Retrieved from "https://wiki.guildwars2.com/index.php?title=Tribune_Kyranith_Steelgrip&oldid=1603458"
Categories: