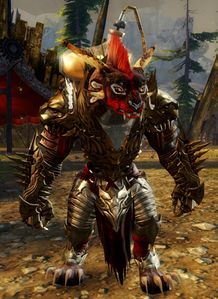 Cinder Steeltemper is my second-in-command. Deadly with her swords, and a little too trigger happy with her flamethrower. She loves a good barbecue if you know what I mean.

Cinder Steeltemper is the second-in-command of Ryland Steelcatcher's Steel Warband in the Blood Legion and a member of the Dominion. She is proficient with the flamethrower.

Cinder Steeltemper was found hidden near the corpses of presumed parents by a Blood Legion patrol. After this, she was brought to the Blood Legion Fahrar in Grothmar Valley where she met Ryland Steelcatcher.[1] The primus there used to beat the cubs with a metal rod until Ryland fought back and nearly killed the primus, though Cinder persuaded him to settle for keeping him alive but forcing him into retirement.[2][3]

After graduating from the fahrar, Cinder became Ryland's second-in-command in the Steel Warband. They recruited other members such as Ranoah Grindsteel, Vishen Steelshot, and even the ex-Renegade Nicabar Steelweaver. However, Cinder was disappointed to learn that the warband's first assignment was homeguard posting at Grothmar Valley instead of getting to fight enemies of the charr.[4]

As the years passed, the Steel Warband got to participate in various battles, and their fame grew in the Blood Legion. One of their notable battles involved defending the Brokentooth Maw outpost from the Branded by holding a nearby pass.[5] Cinder began experimenting on tempering her weapons with primordial slag from Destroyers to make them more effective.[6] She also began developing feelings for Ryland.[7]

Cinder attended the opening ceremony of the All-Legion Rally in 1332 AE, fighting the branded devourer alongside her fellow warband members Ryland and Nicabar shortly after Imperator Bangar Ruinbringer had promoted Ryland as centurion. After the Elder Dragon Aurene had flown by and Branded the broodmother, Cinder walked away from the now crystallized creature.

The Steel Warband accompanied Ryland and several belligerent warbands from the High Legions and Renegades to Shiverpeaks Pass while most of the celebrating crowd remained unaware of what was happening. In a clandestine meeting, Bangar revealed his ambitions to subjugate the Elder Dragon Jormag as a counter to the growing power of Aurene and the Pact and asked the present warbands to assist him so they could elevate the charr to a position of power in Tyria. Ryland stood beside Bangar and cheered the gathered audience on. The charr destroyed the bridge behind them to prevent anyone from following them into the pass as they began the long trek north.

The Steel Warband was ordered to establish a supply line for Bangar's main forces through the countryside leading to northern Bjora Marches. However, the cold weather and the first snowstorms took the choppers out of comission, causing many pilots to panic and dump supply crates which scattered throughout the wilderness. While the warband prepared to escort the TT6-B Devourer tank and scout the way north, Cinder challenged warband recruits to various combat contests to pass the time.

Before the warband set out from camp, Cinder competed with the recruits as they killed nearby Sons of Svanir patrols while she joked about Ryland's privileged position as Bangar's latest favorite. Once the charr began the journey through the hostile northern landscape, she challenged the recruits to more contests which involved killing aggressive Tar Elementals and Darkrime Skelk. Her enthusiastic use of the flamethrower raised concerns within the warband.

As the warband realized that a new and even more fierce blizzard was headed their way and would make their advance more difficult, Nicabar suggested that they take a shortcut through a ruined fortress which had once belonged to the Stone Summit dwarves. As they entered the ruins, however, they discovered much to their surprise that the Stone Summit were still guarding the area although these dwarves did not appear to be alive when they attacked the warband in rage.

After fighting through the ruins, the warband encountered the Ancient Forgeman, a dwarven construct which the Stone Summit had been using to repel trespassers. Although Ryland had initially not wanted to shoot the distress flare to summon reinforcements because he wanted to prove to Bangar that he could handle the mission by himself, he relented when he realized what the warband was up against. Despite using the flare, however, reinforcements did not arrive on time, so the warband had no choice but to engage the forgeman and defeated it after a fierce struggle.

By the time the battle had ended, the warband noticed Bangar himself appearing with an entourage to question them why they had not shown up at the rendezvous point. Because the blizzard was getting worse, Bangar ordered Ryland to follow him into Darkrime Delves so they could scout an alternate route through the pass. When Cinder suggested that she could send some of the warband members to assist the pair, Ryland told her that the imperator had already given his orders and the rest of the warband should stand by and wait for further instructions. While waiting for Bangar and Ryland's return, Cinder conversed with the rest of the warband and admitted that the recruits' actions had impressed her. The warband eventually united with the rest of Bangar's forces as they headed deeper into Bjora Marches.

Whispers that were originating from Jormag's champion Drakkar began affecting Bangar's army by 1333 AE, including the Steel Warband. Cinder noted that the warband members had begun eyeing each other suspiciously, and she resolved to end the influence of the whispers.[8] However, Bangar believed that most of the charr following him were too weak-willed to resist the whispers, so he and Ryland decided to confront Drakkar by themselves while ordering the rest of the army to stay behind.[9] Following Drakkar's demise, the two charr reunited with the rest of the army and continued their journey.

After an encounter with Bangar and Ryland in Bjora Marches, the Pact Commander used the Scrying Pool in the Eye of the North to witness visions of the past involving members of the Steel Warband and learned about the warband's struggles to establish a northern supply line for the rogue imperator's forces.

As Bangar established his Dominion and rallied more support behind his cause, the Steel Warband assisted him in his campaign. Although the High Legions organized into the United Legions to face Bangar's forces in combat, the Dominion won many of the battles it fought in while gaining more support in the process. Bangar eventually directed the Dominion to the Drizzlewood Coast where he had located Jormag in. Intending to awaken the Elder Dragon, the Blood Imperator ordered Ryland and the Steel Warband to direct the military effort in the south and exterminate the native human, norn and tengu populations in the region while the rest of the Dominion built the Frost Citadel near Jormag's resting place.[10] Ryland was promoted to tribune, and the rest of the Steel Warband received centurion ranks.

By the time the United Legions had tracked the Dominion forces and fought against them in the Drizzlewood Coast, the Steel Warband proved themselves as skilled combatants and strategists despite their youth. They managed to push the United Legions' forces down to the Umbral Grotto while using propaganda to sway demoralized legionnaires to join their cause. Instead of destroying the diminished legions' forces, however, Ryland arranged a parley with the legion leadership where he offered them mercy as long as the legions joined the Dominion.

At a parley, Cinder participated in the talks alongside Ryland and Varinia Stormsounder and witnessed the recovered Pact Commander joining the talks. Cinder was quick to correct the Commander about Ryland's rank during the heated conversation that ensued. The arrival of the humans Logan Thackeray and Kasmeer Meade angered Ryland who had wanted the parley to be between charr, however, so Ryland, Cinder and Varinia called off the talks and stormed off, and the two armies resumed hostilities.

Cinder returned to the Steel Warband's secret base in Breakroot Basin to direct the Dominion's assault from there. However, the Pact Commander, Rytlock Brimstone and the acting imperators of the United Legions had located the base and stormed it. The assault force captured Cinder after a fierce battle as a bargaining chip with Ryland for a second parley. 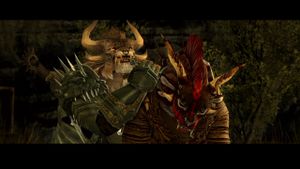 Smodur the Unflinching kills Cinder during a parley with Ryland Steelcatcher.

After Iron Legion Imperator Smodur the Unflinching had utilized a Searing Crystal to bomb a research-and-development team with assistance from Rytlock Brimstone, the Pact Commander's assistance and Efram Greetsglory's atoning Flame Legion splinter group, Cinder witnessed Efram and Smodur arguing in the taken Steel Warband base about Smodur's secretive actions, and the Commander halting the hostilities between the two charr leaders as they headed for the new parley with Ryland.

Although Cinder was defiant at her captors at first and confident in her warband's eventual success, Smodur surprised her by telling her that everyone else in her warband had been killed in battle while she had been in captivity except for her and Ryland. Cinder recovered from the news, however, and insulted the Iron Imperator by revealing that during her fight against him she believed that he had not lived up to his name "the Unflinching," which amused Rytlock.

When Ryland arrived to the former Steel Warband base, Cinder witnessed him and Crecia arguing about the importance of Steel Warband and how Ryland and Cinder could still defect to the United Legions' side to convince other charr to do the same and stop the civil war. Bored of the negotiations and angry at the idea of Crecia potentially letting Cinder go free to convince Ryland to join the legions, Smodur stabbed Cinder in the neck while stating that the legions did not need traitors in their ranks.

Cinder uttered Ryland's name with the last of her strength before collapsing, and her death enraged Ryland who attacked Smodur in revenge. Crecia's flame shield protected the Iron Imperator, however, causing Ryland to flee the scene in anger and ending the parley. Crecia was just as angry about Cinder's death as Ryland had been, and she told Smodur that his actions had ensured that the civil war between the United Legions and the Dominion could no longer be ended with diplomatic means.