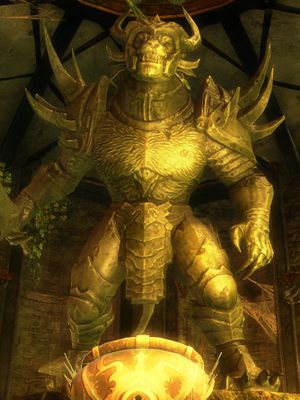 Statue in the Vault of the Khan-Ur.

Khan-Ur, or the primus imperator, is the title used by the supreme ruler of the charr; underneath the Khan-Ur lie the imperators. The Claw of the Khan-Ur is the weapon of the Khan-Ur; having it is one of the requirements for a charr to become a Khan-Ur, another being performing a great act to show the individual's power.

There has been only one true Khan-Ur. His descendants, the imperators of the modern High Legions, are all claimants to the title, but despite several attempts over the years no other charr has been able to unite the charr under a single banner for long.[1] Currently, the respective Iron Legion and Blood Legion imperators Smodur the Unflinching and Bangar Ruinbringer are known to be vying for the title.[2]

There has been only one true Khan-Ur, whose name is never mentioned and is only referred to as "the Khan-Ur." The Khan-Ur unified the warbands and had the charr spread throughout the northern reaches of their homeland down into the lands east of the Shiverpeak Mountains. The Khan-Ur had a cubhood friend named Palomine. According to legend, the Khan-Ur's firstborn cub was the first soldier, and eventual imperator, of the Blood Legion.[3]

In the early days of the charr empire, the united warbands subjugated or destroyed any and all who dared defy them within their territories with the exception of the Forgotten and the dwarves.[1][4] With dominance, however, came the inevitable problems. Internal strife, reckless power-mongering, and brutal feuds threatened to tear apart this otherwise secure empire. Only the strong personality of the Khan-Ur kept the charr from falling into squabbling factions.[1]

The arrival of humans on the Tyrian continent changed the balance of power, however, as humanity used magic and the assistance of their god of war, Balthazar, to their advantage to drive the charr out of Ascalon circa 100 BE.[5][6] Undaunted, and now truly united against a common foe, the charr prepared to launch a bitter counterstrike, intending to burn everything in their retreat. However, as they planned the assault, the Khan-Ur was assassinated. It is not known who murdered the last Khan-Ur, nor if some legion had been behind the assassination or if was the humans or their gods.[1]

With the Khan-Ur's death, the legions once more fell into conflict and chaos. In the wake over the power void, the four children of the Khan-Ur squabbled among themselves in the War of Succession.[7] They ultimately divided the empire into regions controlled by their respective High Legions in their futile attempts to claim the title of Khan-Ur and regain control of all the charr legions.[8][9]

Because it is unknown how many cubs the Khan-Ur actually sired, other heirs than the lineages of the four imperators are suspected to exist. Occasionally a smaller bloodline has surfaced with claim—but none have made a successful bid, and attempts from these would-be heirs have not led to any known conflicts among the charr.[1]

According to charr legends, the Claw of the Khan-Ur contains a part of the original Khan-Ur;[10] some sayings even refer to his claw as being severed.[11] In the present day a charr's courage being compared to the Khan-Ur's is seen as a great compliment.[12]