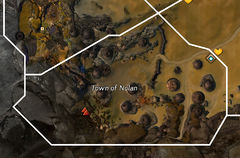 Map of Town of Nolan

The Town of Nolan is an area within the Diessa Plateau. A group of Iron Legion charr have established this settlement situated where the ruined city of Nolani once was. In the back of the town a large pile of huge rusty gears lies scattered about an ancient courtyard. North of the vista up a flight of stairs is the entrance to the North Nolan Hatchery.

Climb the rocks just north of the vista

Protect the caravan from separatists (16)

Soldier (1): Do you know anyone headed north? I need someone to pick something up for me.
Soldier (2): Only troops, and I get the feeling they ain't coming back anytime soon.

The cub patrol
(The cubs arrive from the fahrar and walk to the primus.)
Primus Kurr: Listen up, troopers! It's time for patrol. You're going out, and you're coming back.
Cub (1): What's our objective, sir?
Primus Kurr: Don't start any fights...but be ready to finish them.
Cub (2): Who's in command?
Primus Kurr: He won King of the Hill yesterday, so you'll be following his orders.
Cub (2): He cheated. And I know the fields better than he does!
Primus Kurr: He won, trooper. You lost. Fall in and follow your orders. Got it? Good! Get rolling!
(The patrol moves to the first checkpoint.)
Cub (1): Use the wheat fields for cover!
Cub (1): Watch our flank. Get ready for ambush.
Cub (2): Yeah, we could get attacked by cows at any moment.
Cub (1): Stow it, soldier!
Cub (2): You're not a legionnaire yet. When we get back to the fahrar, you are so dead.
(The patrol moves to the second checkpoint at Oldgate Clearing)
Cub (2): This is boring! When do we get to fight?
Cub (1): Orders. Patrol and observe. We don't start trouble. We just finish it.
Cub (2): Who put you in charge?
Cub (1): I put me in charge! 'Cause I'm the decider! You can fight me for command, or you can keep your mouth shut! What's it gonna be?
Cub (1): Yeah, that's what I thought. Fall in. We're on patrol.
(The patrol moves back to the entrance, passing by soldiers.)
Soldier (1): I think they're are[sic] at it again.
Soldier (2): Cubs and their warbands. I was starting to worry about them.
Soldier (1): Yeah, I haven't seen them fighting for days!
Soldier (2): Don't worry. It'll pick up again soon. A good tussle is exactly what this town needs. Be ready for it.
(The patrol returns to the primus.)
Primus Kurr: How was patrol?
Cub (2): Our leader is a jerk. Thinks he's some kind of legionnaire already!
Primus Kurr: Well then, your next responsibility os to challenge him to single combat. Just like I taught you!
Cub (1): Hey, maybe she'll follow orders this time. Or maybe she'll just talk me to death!
Primus Kurr: You sound just like your parents. Get back to the fahrar with the rest of the cubs. Troops dismissed!
(The cubs return to the fahrar in the Town of Nolan to wait for their next assignment.)

To reach Anya Fairmind's strawberry garden, you have to navigate an unofficial jumping puzzle (there is no achievement for succeeding, just the node farm at the end).