Banner of the Flame Legion.

Those traitorous zealots tried to lead the charr to dominance by any means necessary. Now, their goal is to destroy the other three legions and force them into subservience.

The Flame Legion (pejoratively referred to as the Gold Legion by their enemies),[1] is one of the four charr High Legions.[2] From their base in Citadel of Flame, they attempt to impose their will on the rest of charr society.

The Flame Legion is defined by zealotry and superstition, and until two centuries ago, had unified the charr more than any other force since the days of the Khan-Ur. Unfortunately for the charr, the basis for the Flame Legion's dominance was deceit, and so when their treachery was discovered, it was outcast from the other Legions in a spectacular fashion. Since then, the Flame Legion has waged a war against the other three High Legions, hoping to restore the shaman caste to power.

Section-stub. This key section of the article is incomplete. You can help the Guild Wars 2 Wiki by expanding it.
Reason: Expand lore on Flame Legion culture.

The Flame Legion has its own distinct culture, one that is notably more superstitious and misogynistic than the other High Legions. They make far more use of magic than the other legions, and their shaman caste once dominated the charr.

After the assassination of the last Khan-Ur, the Flame Legion, like the other High Legions, was founded by one of his direct descendants. The Flame Legion did not secure its dominance until roughly 850 AE, almost a millennium after the charr had been pushed from Ascalon by human magic. On an expedition to Hrangmer, the Burnt warband of the Flame Legion discovered the titans,[2] fiery servants of the deposed god Abaddon, although the charr were not to know that. The titans offered the charr magic in exchange for worship, and the Flame Legion gladly obliged. In time, the shaman caste came to be the ruling class of the charr, and worshipped the titans. When a Blood Legion soldier, Bathea Havocbringer, rebelled, she was killed as a sacrifice to the charr's new gods. After that, females from the Blood Legion were no longer allowed on the battlefield, and in time, this followed for females of all Legions.[2][3]

In 1070 AE, the Flame Legion, led by Bonfaaz Burntfur, brought down the Searing on Ascalon with titan magic, destroying the Northern Wall and allowing the charr to seize the human kingdom. The charr moved south and west to conquer the other kingdoms with the Flame Legion's imperator Ventus leading the assault on Orr; were it not for the timely rise of the White Mantle in Kryta and the Cataclysm which sunk Orr, the charr would have come to dominate the entire surface of Tyria. When Vizier Khilbron released the titans from their prison behind the Door of Komalie and sent them across the continent, fulfilling the Flameseeker Prophecies, the Flame Legion looked poised to finally reclaim Ascalon. However, the shamans were humiliated as their gods were killed in front of them by a group of adventurers serving the dragon Glint in 1072 AE.

With the titans deposed, the superstitious Flame Legion sought other beings of power to hold up as gods. When the Great Destroyer, herald of the Elder Dragon Primordus, awoke in 1078 AE, Hierophant Burntsoul chose the destroyers as the new gods of the charr. However, the destroyers were summarily shown to be false too by Pyre Fierceshot and Gwen "the Goremonger" who defeated them and the hierophant. The authority of the Flame Legion was dealt another blow in 1090 AE when the Foefire weakened their grip on Ascalon. The Flame Legion imperator at the time, who had ignored the warnings of the Fireshadows about King Adelbern's plans, lost his life and the Claw of the Khan-Ur during the assault on Ascalon City on the eve of the Foefire and had his name struck from history records because of his failure.[4]

In 1116 AE, the rebellion which Pyre Fierceshot had begun finally bore fruit when the three High Legions faced the shaman caste in battle on the Plains of Golghein. Still, the Flame Legion was powerful enough to hold its own, and the chances of victory for the other legions were looking slim until Kalla Scorchrazor, a female charr who had been training in secret, added her female forces to the other legions', effectively doubling their number. The Flame Legion, who had not included females in their ranks, were overwhelmed and agreed to a surrender. However, the Flame Legion imperator was so ashamed of his defeat that he stabbed Kalla with a poisoned dagger during his surrender; he was executed shortly after by Iron Legion imperator Forge Ironstrike for his treachery.[5]

Once the Flame Legion's hold was broken, the shamans and their followers fled into the Blazeridge Mountains to lick their wounds. Escape was possible primarily because the other three legions were so focused on rebuilding their internal hierarchies after generations of Flame Legion control.[6] Within the safety of their headquarters in the Citadel of Flame, the Flame Legion began rebuilding its strength so it could one day subdue the rebellious High Legions under its rule once again. Since the Battle of the Plains of Golghein, charr society was directed away from magic and towards misotheism and technocracy, leaving the Flame Legion maligned. 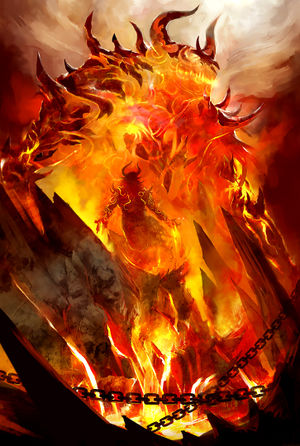 Gaheron Baelfire.
Section-stub. This key section of the article is incomplete. You can help the Guild Wars 2 Wiki by expanding it.
Reason: Add summaries of Flame Legion plots from early charr personal story.

In 1325 AE, the Flame Legion had regained much of its former strength under the leadership of imperator Gaheron Baelfire, who planned to magically ascend to godhood with powers rivalling those of the human gods. He was supported by the Godforged, a fanatical Flame Legion sect. Gaheron and Hierophant Improaster were stopped by the newly-formed Pact, accompanied by Logan Thackeray, Rytlock Brimstone and the Pact Commander, and their demise sent the Flame Legion into disarray.

After their imperator's death, the Flame Legion splintered into multiple competing factions vying for power. Three splinter groups remained in the Legion's headquarters, the Citadel of Flame, and attempted to restore their power. One splinter group formed under the leadership of Tribune Burntclaw, while another had their shamans search for a way to resurrect Baelfire with the Eternal Flame. Meanwhile, Crea Irontooth, an Iron Legion engineer, was enslaved by a third splinter group and was forced to work on building a Flame Legion superweapon. The Pact ultimately foiled the plans of all the three splinter groups.

During this time the Order of Whispers reported that centaurs had been seen meeting with the Flame Legion, which raised concerns in the Order in case any tentative partnership between the Flame Legion and the centaur alliance came to pass.[7]

In 1326 AE, Scarlet Briar, herald of the Elder Dragon Mordremoth, persuaded a Flame Legion splinter group to form the Molten Alliance with the dredge in hopes of gaining their technology and the Flame Legion's magic with which to build sonic probes to search for ley lines in preparation for a goal only she knew of at the time—to awaken Mordremoth.[8][9] The Flame Legion agreed to the proposed alliance as they intended to betray and enslave the dredge once they had outlived their usefulness. The dredge, meanwhile, hoped to gain access to the Flame Legion's magic to strengthen the Moletariate.[10] The Legion used dredge personnel carriers and armor forged in Sorrow's Embrace which they combined with their magic, becoming more dangerous than ever before. The Molten Alliance began raiding the homesteads and ranches of the Wayfarer Foothills and the Diessa Plateau, displacing many charr and norn refugees and capturing many others as slaves for their factories. This led the charr and norn to discover this new Alliance's existence, and they fought back and ultimately foiled the Molten Alliance's plans after a raid to the Molten Facility which saw the rescue of slaves and the deaths of notable Molten champions.

Despite suffering this setback and realizing that Scarlet had been using them for her own ends, the Flame Legion splinter group could not abandon their dredge allies in the Molten Alliance and return to their Flame Legion brethren because they would have been killed on sight for their failure. Hoping to still gain something from their shaky alliance, the Flame Legion splinter group continued working with the dredge and aided Scarlet as she gathered her many alliances and sent them all to assault Lion's Arch.[11] After Scarlet's demise in battle, her bickering alliances dispersed and left the destroyed Lion's Arch behind. Little else has been heard of the Molten Alliance since then although its leaders are still unaccounted for.[12]

During the World Summit when various nations' leaders had gathered in the Grove to discuss the threat posed by Mordremoth in 1327 AE, Iron Legion imperator Smodur the Unflinching reminded everyone present that the Flame Legion splinter groups continued being a threat to Ascalon. According to the imperator, the Flame Legion was waiting for the other legions to leave the Black Citadel unprotected so they could invade while the Legions assisted the Pact against Mordremoth's forces.[13] Although Smodur ultimately relented and sent some of his troops to assist the Pact, the Flame Legion did not make their presence known during the campaign against the Elder Dragon.

In an initiative led by Blood Legion imperator Bangar Ruinbringer and tribune Crecia Stoneglow, at least one Flame Legion splinter group had agreed to a truce with the other legions, and attended the All-Legion Rally in Grothmar Valley in 1332 AE.[14] The price of admission was steep—the cubs of the Flame Legion were to be educated in the Blood Legion fahrar. This period also saw the first female Flame Legion soldiers since the days of Bathea Havocbringer, and they tried to adjust to their new roles in the army and to the condemning and pitying looks from the other legions' females.[15] Flame cubs also had troubles adjusting to their new surroundings as they were bullied in the fahrar and often ended up in fights when they tried to defend themselves.[16]

At the rally, led by Efram Greetsglory, the Flame Legion worked hard to prove their good intentions to the other legions by hosting a ceremonial lighting of an effigy with the Sacred Flame, and by casting a spell to summon and defeat Murakai, Lady of the Night, who had been haunting Doomlore Ruins. They also participated in the demolition derby alongside the other legions.

Bangar's invitation to the Flame Legion, however, was merely a ruse to gain access to Flame Legion soldiers for more recruits to his Renegade cause, ranging from adults to young adults and cubs who were being recruited in the fahrar.[17] Although some in the Flame Legion remained loyal to Efram who was viewed as a better leader than Gaheron Baelfire had been,[18] many soldiers took the opportunity to join Bangar on a trek north to find the Elder Dragon Jormag in order to secure a future for the charr because they were not only wishing to join the fight again but to belong to the legions rather than being viewed as outcasts.[19] Despite Bangar and the Renegades' actions and the defection of several Flame Legion warbands to the Blood Imperator's ranks, Efram assured the other Imperators that he would continue the truce and collaborate with the less hostile factions among the charr to secure the Blood Legion Homelands.