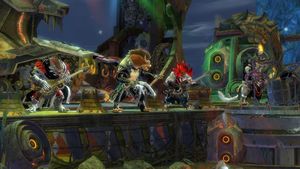 We are Metal Legion! And we're here to put the "band" back in "warband"!

— Varus Chainrazor in A Concert for the Ages

Metal Legion is a charr metal band. They perform at Blood Stand Stage in Grothmar Valley at sundown, and can be found relaxing at their camp in Band's Bivouac during the day.

Not much is known about the band's origins, other than that its members are gladia who have formed a warband of sorts together.[1] Despite their status on the lowest rung of charr society, they are very popular for their music and "epic" concerts, including the "Brimstone & Fire" tour,[2] which heavily feature pyrotechnics maintained by asuran technicians. The band's hit song is called "Medium Rare."[3]

In 1332 AE, Metal Legion were sponsored by Imperator Bangar Ruinbringer and invited to perform at the All-Legion Rally, ostensibly to celebrate the death of the Elder Dragon Kralkatorrik and honor the bravery of General Almorra Soulkeeper who had contributed to the Elder Dragon's fall. However, there were indications that the band's true purpose at the festival was to feed propaganda to the High Legions on Ruinbringer's behalf, with Varinia Stormsounder, Blood Legion's Minister of Morale, keeping a close eye on them during the festivities.[4][5]

Aside from the lyrics of the songs above, lyrics of an unnamed song from Metal Legion's "Brimstone & Fire" tour have also been mentioned:

Town's in flames / sky burns hot
Dreams are maimed / and left to rot
Rip 'm to shreeeeds / tear off their heeeeeads![2]