The charr rebellion took place in 1116 AE. It simultaneously overthrew the shaman caste and restored the charr females to their rightful place on the battlefield. 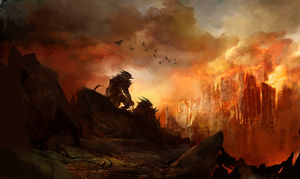 In the days when humans still presented a challenge for the charr, the charr did something that they have long since sworn never to do again: they worshipped gods.

Before humans came to Tyria, the charr had no gods. They knew about creatures with power they could barely comprehend, but they thought of them as foes to be defeated, not gods to be placated. When they suffered their first defeats at the hands of humans, though, many charr blamed this on the fact that they could plead to their gods for help while the charr fought alone, relying only on themselves.

A warband from the Flame Legion came to the rest of the charr one day and announced that they had found gods for them to worship. These were creatures later called titans, but they were powerful enough that such labels mattered little. The shamans who led their worship used braziers of fire as icons of their newfound gods. The other legions hesitated to follow their lead, but the Flame Legion had so much success at converting others—often by force—that many assumed that they must have gods on their side. It was the titans that gave the charr the cauldrons that allowed them to breach the Great Northern Wall. 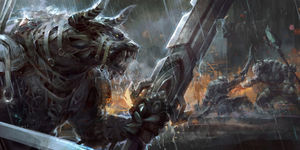 One famous charr stood against them: Bathea Havocbringer of the Blood Legion. She sniffed out the foul plans of the Flame Legion and their new shamans, who directed the worship of their gods in ways that brought themselves power and profit. She said, "I will bow before no one and nothing, be it mortal or god", and she persuaded many other charr to follow her lead.

Because of this, the shamans gathered in the night to plot against her. They captured her and made a blood sacrifice of her to their new gods. They declared her a traitor and accused her of using her sexuality to tempt the males from the true path of the gods. To prevent any more such treachery, they marked all females with the same brand of deceit and banned them from serving in the legions, where they would mix with the males.

Many females objected to this, as did some males. Several shared Havocbringer's fate, and eventually the others saw no choice but to submit themselves to the their new gods' will. The charr lived like this for centuries, long enough that most of them could not remember there ever having been another way. 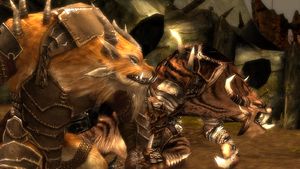 After the Searing, some charr realized that the shamans of the Flame Legion—who had long abused their powers—had tricked them. A warrior named Pyre Fierceshot helped spur the rest of the charr to stand up to the Flame Legion, but they did not triumph until his grandcub, Kalla Scorchrazor, led a rebellion that restored female charr to their rightful place.

Males who thought that females were beneath them were poor at keeping secrets from them. The females watched the shamans and learned that they were cheating the charr of their right to chart their own destiny. Armed with that knowledge, they spread it far and wide throughout the charr lands, until most charr females—and many of their chosen males—sided with Scorchrazor.

Before Scorchrazor entered the rebellion, plenty of other charr had already lined up to be counted against the shamans of the Flame Legion, following in the tracks of Pyre Fierceshot. As their numbers grew, so did the ferocity with which the shamans tried to keep them down. With Scorchrazor's help, though, the rebels finally had a chance at winning.

Scorchrazor pointed out that the shamans of the Flame Legion lacked one things that the rebels had: open minds. If the rebels could see their way fit to allowing the females to fight beside them, they could effectively double their numbers overnight. This would give them the soldiers they needed to be able to overwhelm the shamans and their magic. And, eventually, the human kingdoms as well.

Having grown up with their females in servitude to them for centuries, though, many of the male charr were reluctant to go against this 'tradition'. They argued that the females had stayed at home for too long and were no longer suited for the battlefield—if they ever had been.

To counter this argument, Scorchrazor threw down a challenge before her detractors. The most important of these was Forge Ironstrike, the imperator of the Iron Legion, and he agreed to meet her in single combat. If she could defeat him, he would acknowledge that female charr were just as qualified to become soldiers as the males. Otherwise, he would kill her as an example to the other females who were confused about their places. 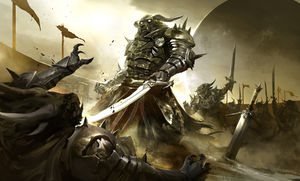 The battle took place in the ruins of Rin, the old human capital of Ascalon, which the charr have now restored as the Black Citadel. The imperators of the Blood and Ash Legions stood as seconds. Blood backed its daughter Scorchrazor, while Ash sided with Iron. Scores of others watched, from the highest tribune all the way down to the lowliest gladium.

Scores of charr came to watch the battle in the ruined arena in Rin. The two warriors were well matched. As a male of the race, Ironstrike was the larger and stronger of the two, but Scorchrazor was by far the faster and more skilled.

Time after time Ironstrike charged, his claws stretching for Scorchrazor's throat, but each time she dodged him and sliced him with her own claws as he passed her by. Eventually, the frustration and the loss of blood took its toll, and Ironstrike grew tired. Then Scorchrazor switched to the attack.

She drove the battered Ironstrike back until he ran out of room to retreat. He summoned the last of his strength for one last charge, but she dodged that, too, and knocked him flat. She pounced on him as he sprawled on the arena's dusty floor and forced his surrender from him.

Released, Ironstrike honored the terms of their deal. He acknowledged her right to battle alongside him, and he welcomed the rest of the female charr to join their rebellion. Even the shamans from the Iron, Blood, and Ash Legions rallied to their cause.

The forces of the Flame Legion and its shamans met those arrayed against them in final battle on the Plains of Golghein. Because the Flame Legion had told their females to 'stay home where they belonged', they were so outnumbered that they surrendered rather than be slaughtered.

To her credit, Scorchrazor accepted the surrender, but only so that the charr would not be stripped of the power of the Flame Legion, which had more shamans than all of the other legions combined. Even without gods behind it—perhaps especially—magic has its uses.

The imperator of the Flame Legion was so shamed by his surrender that when he finally met Scorchrazor, he stabbed her with a poisoned dagger. Charr may do anything to win a battle, but only the worst cowards would violate a surrender to do so. His treachery cost Scorchrazor her life, but her last words were "At least I die knowing my sisters are free".

Imperator Ironstrike himself cut the throat of the coward on the spot. The Flame Legion imperator went to his reward before Scorchrazor did.