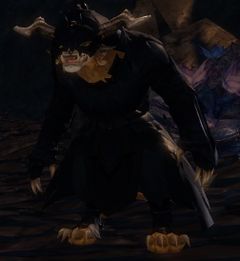 Ren Shadestalker is the scout for Victium Moors in Iron Marches. He can be found just below the text "Obsidian Run" on the world map.

The Flame Legion have decimated Victium Moors, and they patrol it day and night. Their true intentions there are unknown. It would take an army to vanquish their forces, but I've heard there's a warband out there determined to bring them down. If that's true, and if you can find them, join their fight.

Good to see you, <Character name>. Have anything to report? The Flame Legion is still licking their wounds after all the damage you caused.

Nothing new. Just checking in.