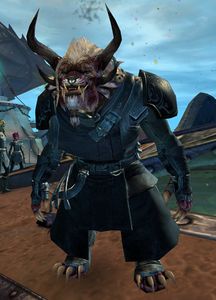 Snarl Backdraft is a charr legionnaire of the Ash Legion. Snarl was raised in Lion's Arch and is described as highly charismatic. His skill seems to be a cut above average, since the founder of the Vigil, General Almorra Soulkeeper, seems personally interested in his recruitment, mentioning she's been trying to win him for the Vigil for quite some time. As a member of the Ash Legion, he was placed in charge of working with the Iron Legion for use of the Ghostbore Musket to alter them into turrets, placing him in competition with Galina Edgecrusher who was assigned by the Blood Legion to utilize the Ghostbore Musket technology with cannons.

Later on, Snarl's warband is put in more cooperative missions with Galina's warband, such as an assault on the Flame Legion camp in Sunken Halls of Clarent where Exaerix Infernus was assassinated. During that mission, Snarl and Galina were recruited by the Vigil to assist in retaking Claw Island, where they bring their modified Ghostbore Musket technology in a bet to see which of the two can tally more kills. Later on, they assist the Pact with their expertise on Ghostbore technology that proved to be highly effective against the Risen.

During his time with Galina, he fell in love with her but believes that a relationship between them would not work out, due to them being from different legions.

Although the player gets to rescue his warband during a story instance, its name is never given.