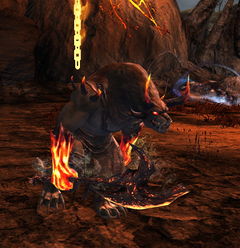 Try to break me, unbeliever. You will roast and die.

Champion Drakin Cinderspire is a powerful, unique Flame Legion Lava Shaman that leads the Flame Legion forces occupying the Scorchlands within Iron Marches. He can be encountered at The Blasted Hearth accompanied by many different types of Fire Elementals, and wields an axe as well as potent fire magic in combat.

[Group Event] Defeat the fire shaman and his minions (60)

His skills and attack pattern changes depending on which phase he's currently in:

When Drakin's health pool is completely depleted he will transition to his next phase by retreating to the middle of the area and channeling, becoming immune to damage and summoning a large Fire Elemental as well as multiple Embers.