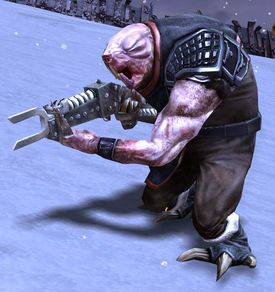 The dredge are a mole-like race. They were enslaved by the Stone Summit dwarves in the past and were ready to fight alongside any who would help free them from their masters' whips. After the Transformation of the Dwarves, the dredge gained their freedom once and for all, and established themselves as the heirs to the dwarven kingdom in the Shiverpeak Mountains, where they battle the displaced norn for control of dwarven territory. They have made their capital in Sorrow's Embrace, formerly the main mine of the Stone Summit.

The dredge are intelligent and roughly humanoid with hunched postures and, due to their race's history beneath the surface, underdeveloped eyes, to the point of nearly being blind. They have a highly developed sense of hearing, and all their repurposed dwarven technology is sound-based, earning them the respect of the asura.[1][2][3]

Blinded. The exception are Molten Alliance dredge as well as those found in the Underground Facility Fractal. 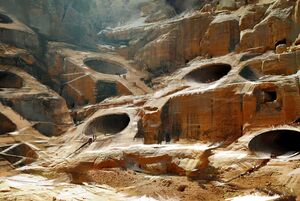 Dredge cave entrances, on the surface.

Little is known of dredge culture, only that they value highly the freedom of their race—a fact that is ironically used by their government to limit personal freedoms, and keep the dredge subservient, much like the dwarves did centuries ago. As such, the dredge can be considered to be in a state of permanent revolution.

The dredge have, in the past, strived to remain independent, but were recently manipulated into cooperation with the Inquest. They have recently become increasingly xenophobic, and the kodan, who have fled south from the Elder Dragon Jormag into dredge territory, view them as expansionist, and see their presence on the surface as an attempt to "pull an asura."[4]

The dredge were, until recently, ruled by a dictatorship of the moletariate, but due to their involvement with the Inquest, a group of opportunistic young officers overthrew the old generals, including Koptev, Zadorojny, and War Minister Shukov, and installed a military dictatorship instead. The military leaders claimed the Inquest the sole "good outsiders" and allied with them to gain control over the Destroyer of Worlds, intending to use it to wage war on the surface races. To this end, Minister Shukov, once considered honorable, took to Inquest methods and enslaved his own people, forcing them to work harder in the name of patriotism.

Despite the revolution, however, the moletariate began working with the Flame Legion as part of the Molten Alliance for access to fire magic, and assisted Scarlet Briar in the assault on Lion's Arch in 1326 AE. It remains unclear if the forces that joined the Molten Alliance were the old or the new moletariate, however. 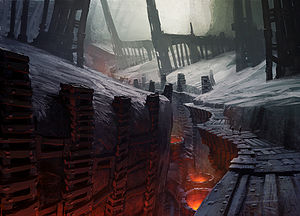 In 1072 AE, the dredge were under the thumb of the Stone Summit dwarves, who used them as slaves in the mines of Sorrow's Furnace. At one point, a few desperate escapees from the Shiverpeak Mountains tunneled for hundreds of miles to reach a strange new home—the Echovald Forest of Cantha, where their offspring jealously defended their prized freedom. These dredge were ferocious and aggressive, having escaped slavery on their own, and planned to establish their race anew in the then-petrified woodlands. With Emperor Usoku's campaign against non-humans, it is unknown if they succeeded.

Meanwhile, in the far north, the dwarven civil war came largely to an end as the nation of Deldrimor launched a pre-emptive strike and destroyed the Stone Summit's superweapon, the Iron Forgeman. Some dredge remained in Sorrow's Furnace, which remains the dredge capital to this day, and others were taken north by the fleeing Stone Summit and put to work in the Vloxen Excavations in the Woodland Cascades, where the Stone Summit used them to unearth an ancient lich known as Zoldark the Unholy. After the final defeat of the Duncan the Black and the Stone Summit in Slavers' Exile, the dredge were finally able to claim their freedom, and rose to inherit the former lands of the dwarves. When the norn fled south from the ravages of the Elder Dragon Jormag, it put them into conflict with the dredge, and to this day the two races battle for territory in the Shiverpeaks.

Section-stub. This key section of the article is incomplete. You can help the Guild Wars 2 Wiki by expanding it.
Reason: Missing the dredge's attempted assassination of Ogden in norn chapter 3 and open world events lore.

In 1325 AE, Snaff's former apprentice Kudu approached War Minister Shukov and convinced him to allow the historically isolationist dredge to cooperate with the Inquest. Shukov was promised a "great opening of the world", and planned for the dredge to flood the surface, conquer the charr and norn, humble the sylvari, and put the ancient humans in their place. This plan was disrupted by Zojja, Caithe, and the Pact Commander, who destroyed Kudu's masterpiece, a rebuilt Iron Forgeman powered by draconic energies. The defeat of the Inquest plunged dredge society into chaos resulting in a revolution against the moletariate, and the outcome of the turmoil is not yet known.

Section-stub. This key section of the article is incomplete. You can help the Guild Wars 2 Wiki by expanding it.
Reason: Missing information about dredge's later actions in Season 1.

In 1326 AE, the dredge formed a Molten Alliance with the Flame Legion of the charr. They lent their technology to the Flame Legion, who gave them use of magic in return to invade the Wayfarer Foothills and Diessa Plateau, razing homesteads and ranches, and displacing refugees. The Wolfborn and the Adamant Guard formulated a response to these attacks, leading to the raids on Molten Facilities in the affected regions to put an end to the Molten Alliance's acts of aggression.

Section-stub. This key section of the article is incomplete. You can help the Guild Wars 2 Wiki by expanding it.
Reason: Missing involvement of dredge in Thunderhead Peaks campaign.

Disengage
And don't come back!
Begone from Dredge world!